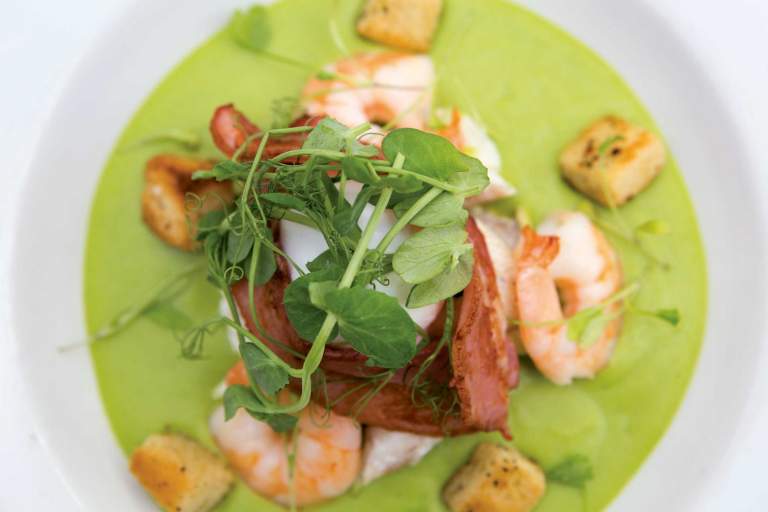 Jennie and Jeff Cooper relish the home-cooked dishes at this bustling, bright restaurant

Such is the enthusiasm of Head Chef Richard Oberholster that he’s inspired in his whole team a love and knowledge of local, seasonal produce, an impressive amount of which comes from the beautiful Powderham Estate on which the restaurant sits. “I’ve been here for ten years, and sourcing from small businesses and local suppliers is important,” he explains. “Following the seasons is also a key focus in my menus.”

There was a light bites and lunchtime menu, but my eye drifted over to the specials board, settling on the wild mushroom risotto. The dish was rich and delectable, giving way to the earthiness of the mushrooms, followed by a hint of crumbly, creamy Sharpham cheese, with a final layer of flavour from tiny pea shoots, enlivening the palate.

Jeff’s ballotine of deboned chicken leg came wrapped in a crisp parcel of streaky bacon. The soft meat had an almost gamey flavour, enhanced by a wild mushroom and thyme stuffing. This was served with an exceptionally creamy mash, and crisp, green vegetables.

I made room for the Dutch apple crumble, with the addition of plump sultanas; the sweet, golden custard was just as delicious. Jeff’s brownie was deftly made – dense and chocolatey, it was nevertheless very light in the mouth.

In a bright and busy restaurant, lunch service was slick, staff were friendly, and the food was the highlight.

(From the Main Dishes on the lunchtime menu)

Desserts are chosen from the display cabinet and pudding boards and include homemade puds such as cheesecakes, trifles, pies and crumbles.