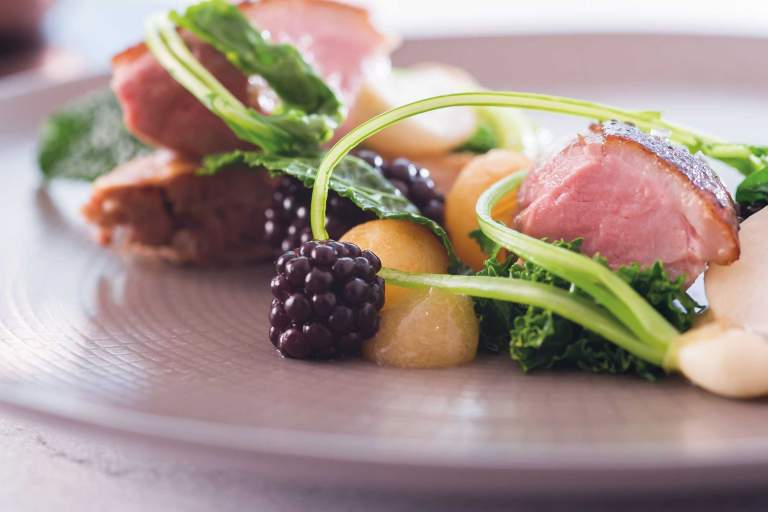 SatNav decided we should travel to this country hotel via the winding roads and open views of Dartmoor. We met with rain storms, bursts of bright sunshine, sheep, ponies, rocks and hills: the drive had set the scene for our moorland escape, and finally, down a winding drive, we arrived at the elegant building, just in time for lunch.

Ashley Wright, Head Chef, has bags of enthusiasm for his dishes and produce. Recently appointed, he intends to stick to the restaurant’s style of classic British cooking with French influences. “I hope to keep our three rosettes and want to maintain our standards,” he says. “Flavour is the most important thing.”

After drinks and canapés in the airy dining room, we were shown to our table where we enjoyed the earthy flavours of our ’demi-tasse’: a smooth, garlic-infused woodland mushroom soup. Our warm bread rolls were all too easy to devour – and I noticed that the table water comes from the Horn of Plenty’s own spring.

Initially, we struggled to eat our starters: my crab with sorrel was presented so beautifully I didn’t want to disturb it. Served on a small plate, the ring of crab meat was shadowed by a spiral of fruity apple sauce, finished with flowers and herbs. Jeff’s duck terrine was precisely cut: its punchy, gamey flavour and silky texture were tempered by some snappy sesame crackers.

The menu changes monthly, but I was lucky enough to be a guinea pig for the next month’s brill main course. Cooked until just white, the sweet flesh was encased in its light, crisp skin; its subtle flavour enhanced by the ricotta gnocchi and earthy asparagus spears. The chargrilled lettuce added a bolder level of taste, offset by a sharp, palate-lifting dressing.

Jeff remarked of his main pork dish that it was a clever touch to be served a lean piece of tenderloin alongside a piece of belly, enabling him to enjoy their flavours and textures individually. The accompanying chargrilled lettuce and purple sprouting broccoli were just warmed through, retaining their freshness.

We shared two desserts – the ’milk and chocolate’ and the all-Devon cheeseboard. The chocolate dish featured a silky, milky mousse; a light, white chocolate sorbet; and rounds of caramel nougat that resembled small, sticky buttons on the plate. Varieties of hard, soft, goats’ and blue cheese were served with rustic crackers and a tangy pickled celery. Coffee and petit fours followed – further fulsome sweet and chocolate flavours to round-off our feast.

Ashley is true to his word: flavour is king here. Three or four main flavours in each dish are expertly combined but not overly fussed with to create memorable dishes. I wonder if there’s any chance I could be a guinea pig for next month’s menu...