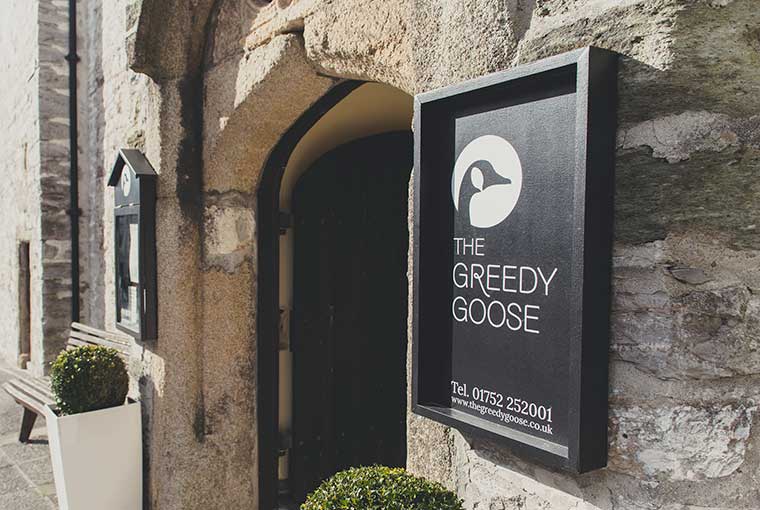 Fine flavour and presentation, coupled with the candlelit charm of a historic building, make this restaurant in Plymouth a hit with Lucy Baker-Kind

The Greedy Goose, in Prysten House on Finewell Street in Plymouth, is celebrating its first anniversary this month, and triumphant occasions and awards will continue to feather its nest if the food maintains the standard that we enjoyed. The restaurant, run by Ben and Francesca Palmer, may be housed in Plymouth’s oldest domestic building, but the food is anything but old-fashioned. Like the building itself, the menu has solid structure, with touches of quirkiness and is presented with class.

My husband and I were impressed from the first delicious forkful. We were each presented with an amuse bouche in a kilner jar – mini cod fritters with squid ink and fennel – and what a delight they were. Light bites full of flavour that whetted our palates for what was to come.

There was then a decision to be made – choose from the à la carte daily menu or the set lunch courses.

My starter of piping hot broccoli soup was smooth and full-bodied – the superfood had been transformed into a super soup. My husband’s Salcombe crab was a delight for both the taste buds and the eyes. The white crabmeat was served with a mini loaf, cucumber and avocado, with a piquant dressing that cut through the potential richness of the crab, while the brown crabmeat was blended with butter and a hint of curry powder into the lightest of textures, and delivered on a side plate reminiscent of the coast, complete with shells and stones.

I chose well-done rump steak from the set menu; it was accompanied by man-sized triple-cooked chips, which were light and fluffy inside and seasoned to perfection. Nick plumped for the tender rib-eye from the à la carte menu, which was such a generous helping it almost defeated him! The accompanying mushroom sauce gave another hit of flavour without being overpowering, and the carrot puree and roasted shallot were flavoursome additions.

After the very generous main courses, we were after something light to finish. I couldn’t resist the ‘Bit of a raspberry mess’. Far from being a mess, it was presented prettily on a black plate. There were piped stars and thin shards of meringue on a feather-light whipped raspberry cream. Nick enjoyed the lemon posset, which gave the ideal citrus zing at the end of the meal.

Having sampled the food, it is no surprise to hear that Ben was a quarter finalist on MasterChef: The Professionals in 2011, and The Greedy Goose was awarded two AA rosettes just five weeks after opening its doors in Plymouth.

It is safe to say that, with food this good, it’s no wonder the goose is greedy!