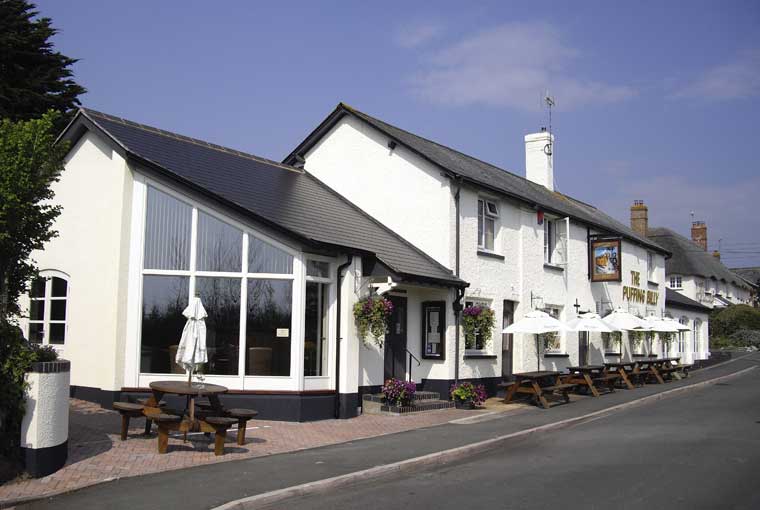 Located in the village of Exton, on the east side of the Exe Estuary, The Puffing Billy is bright and contemporary, serving delicious local produce.

We received a very warm welcome from the owner, Andrew Younger, and the friendly front of house staff showed us into the bar area where we perused the various menus over pre-dinner drinks. There were so many appealing choices, ranging from classic, hearty English dishes to haute-cuisine-style food. The main menu was supplemented by a set menu and specials board.

I chose the honey-roasted duck with spiced quince chutney, endive and walnut salad as a starter, while my fiancé enjoyed the king prawn, squid and chorizo chowder, which was served with warm brioche and langoustine. The duck was succulent and the crisp, nutty salad was a perfect accompaniment. The creamy, velvety chowder had robust flavours and was full of fresh seafood and chorizo.

My main course was a quince-glazed local pheasant breast with crisp bacon, creamed potato and roasted root vegetables. Having never sampled pheasant, I was pleased that I had tried something new, especially as it was local. The meat was tender and the glaze added sweetness. My fiancé had also chosen game - a roast saddle of local rabbit wrapped in prosciutto with sweet potato and confit rabbit risotto. He is a big fan of this meat and said it was one of the best rabbit dishes he had eaten.

We couldn’t resist the local cheese board and decided to share one for dessert. The Sharpham rustic, Norworthy goats’ cheese and Exmoor blue were the perfect way to end the meal.

Head Chef Sean McBride joined us for a chat. Sean has been working at The Puffing Billy since March 2011 and says he likes to change his menu about once a month so that there is always something new for customers. “Whenever we change the menu, we try to outdo the previous one with something better,” he says.

Sourcing local ingredients is a priority at The Puffing Billy and Sean says that most of the ingredients he uses in his menu are locally sourced. All fruit and vegetables, for example, come from Milfords in Exeter, the beef and venison come from Dartmoor and much of the fish comes from the Exe Estuary and the Devon coast.

There are some exciting things planned at The Puffing Billy, including a variety of taster evenings where the kitchen staff will serve food from different regions of the world including Italian, French, and Spanish fare. “No doubt some of the dishes that we will serve up at the taster evenings will make it onto the menu,” says Sean. “It’s a great way for us to get an insight into what kinds of dishes our customers enjoy and what they would like to see more of.”