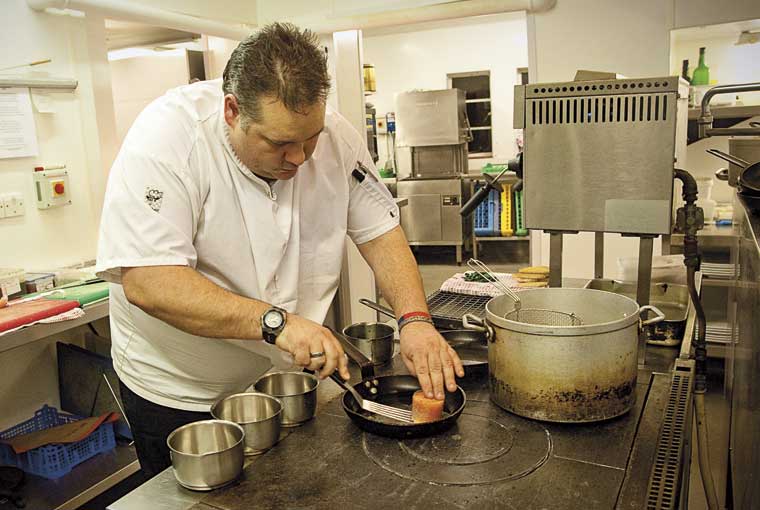 In the Kitchen with… Wayne Pearson

Wayne Pearson, Executive Chef at the Mill End Hotel and Restaurant near Chagford, is a Master Chef of Great Britain and former Young Talent of the Year for the Good Food Guide. He has long been at the forefront of fine dining in the South West, with a track-record of creating exceptional food from seasonal, local produce. Wayne first joined Mill End in 2001 and returned in 2010.

How did you first discover your love of cooking and when did you decide you wanted to be a chef?
My mum’s cooking was so bad when I was young that I started cooking as a form of self-defence! I think I started when I was about 10, and since then it’s been all I’ve ever wanted to do.

Tell us about your background.
I did my basic training at Plymouth College, then moved to the Cotswolds where I worked my way up through the kitchens. On days off I went to London to train with Brian Turner and learnt alot about fine dining. I moved back to the Westcountry in the early 1990s and worked in several places in Devon and Cornwall, before starting work at the Mill End Hotel.

How long have you been working at Mill End and what is the style of food served here?
I first started working here in 2001. I left for three years to run a pub, which is every boy’s dream, but I missed the fine dining and came back in 2010. I’d describe the style of food we serve as a modern approach to classic British dishes, with European influences.

Describe your approach to food and cooking.
Well, it’s always been a passion. If I’m not cooking then I’m thinking about cooking. I like to use quality local ingredients and then cook them in a way that enhances the taste.

You pride yourself on the use of locally grown vegetables, Devon beef, fine local game and fresh fish sourced from around the Devon coasts. What difference does this make to the food you serve in the restaurant?
It makes a huge difference because the quality and freshness is just so high. It makes life easier for me because you have to do a lot less to it in order to get the best out of it. It’s also great to have it all on your doorstep when things like food miles and shipping products in from all over the world is becoming more of an economic and environmental issue.

What are your favourite locally sourced ingredients and why?
Definitely the fish and cheese; the local selection in Devon is so vast and the produce is first-class.

Who are your favourite local suppliers?
I think my favourite would have to be Country Cheeses from Tavistock. They have such an infectious passion and enthusiasm and take such great care of their cheeses, that it makes you feel just as enthusiastic as they are.

What are your favourite seasonal ingredients at the moment and how would you use them in your restaurant?
For November it definitely has to be game, both the feathered and furred varieties. In fact, we’re having a tasting weekend here at the Mill End Hotel from 18-20 November where I’ll be preparing some of the best local game and matching it with wine. An example of a dish I might make could be some fantastic local venison, maybe with a trio of beetroot, watercress, maybe some blackberries… Basically great seasonal flavours, fresh from the ground and the trees!