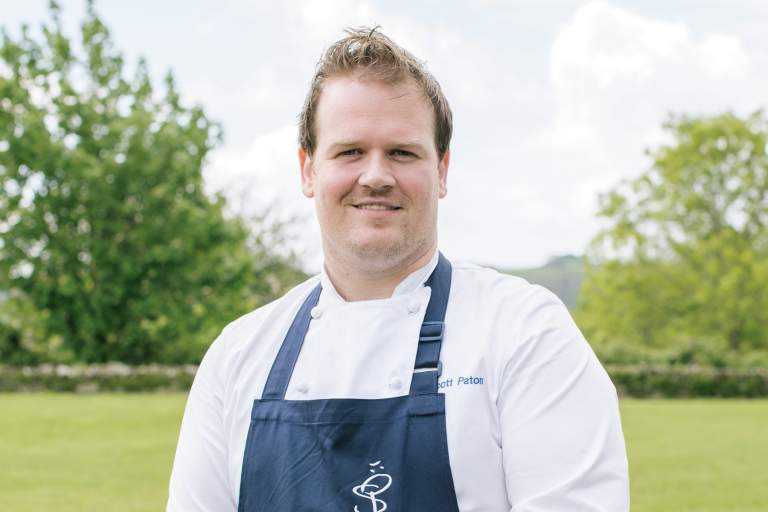 In the Kitchen with… Scott Paton

Scott Paton can’t quite believe that in May 2021 he’s been heading up the kitchens at Boringdon Hall Hotel for five years. “It’s gone very quickly,” he laughs. He’s certainly managed to pack a lot into those five years. Since his arrival at the 16th-century, Grade II Listed former manor house in Plymouth, the hotel has won five stars, three AA Rosettes and was named 2020 Condé Nast Johansens’ Best Destination Spa in the UK and Ireland. Scott also won an Acorn Award from The Caterer as one of the top 30 people in the hospitality industry under 30, just ahead of that milestone birthday.

Despite the accolades, Scott remains modest. He started as a pot washer at The Jack in the Green near Exeter, where head chef Matt Mason encouraged and supported him. It was also where he discovered a talent for pastry, winning gold in the national competition held by the Association of Pastry Chefs in 2008.

After The Jack, he became head chef at The Horn of Plenty near Tavistock, and was soon rewarded for all his hard work with three AA Rosettes. He may be modest but he has plenty to be proud of at Boringdon Hall where the 40-cover Ácleáf restaurant opened in January 2020. It moves a step away from the familiar three-course or tasting menu fine dining experience.

“When we created Ácleáf, I thought about the kind of dining experience I wanted to offer,” says Scott. “If I go out to a nice restaurant, I like it when I get a glass of champagne, or an unexpected fish course or a pre-dessert. That’s great and it makes me feel special. It felt wrong to me that some of the best restaurants in the country will ‘level up’ for VIPs. In our restaurant, we want everyone to have the VIP experience.”

Scott has had no formal training, which makes his progression from pot washer to a head chef with three AA Rosettes all the more impressive. His success is partly attributed to his constant striving to improve and progress. His new table d’hôte four-course menu, each with four options, is a pared-back success with the sublime simplicity of the food disguising the enormous amount of work involved.

“It’s about building all the different flavours, but also about taking things away,” says Scott. “I don’t want to have anything on the plate that isn’t necessary. It’s not about that. I wanted to create an experience. “It’s all about those main ingredients – the best venison, the best beef, the best crab – and we spend a lot of time developing recipes. Take the scallops and shiitake. One of the elements, the shiitake, takes a month to make and it took us three months to develop it.”

Ácleáf, says Scott, is not about him. He didn’t want it to be Restaurant Scott Paton. Modest he may be, but he’s ambitious enough to want a Michelin star. “It’s my biggest aim. I’m very confident our food is at that level. You have to be very happy with the experience you’re providing and the guests have to be happy with it too. That’s important, rather than looking towards accolades.