Here’s to our Local Heroes! 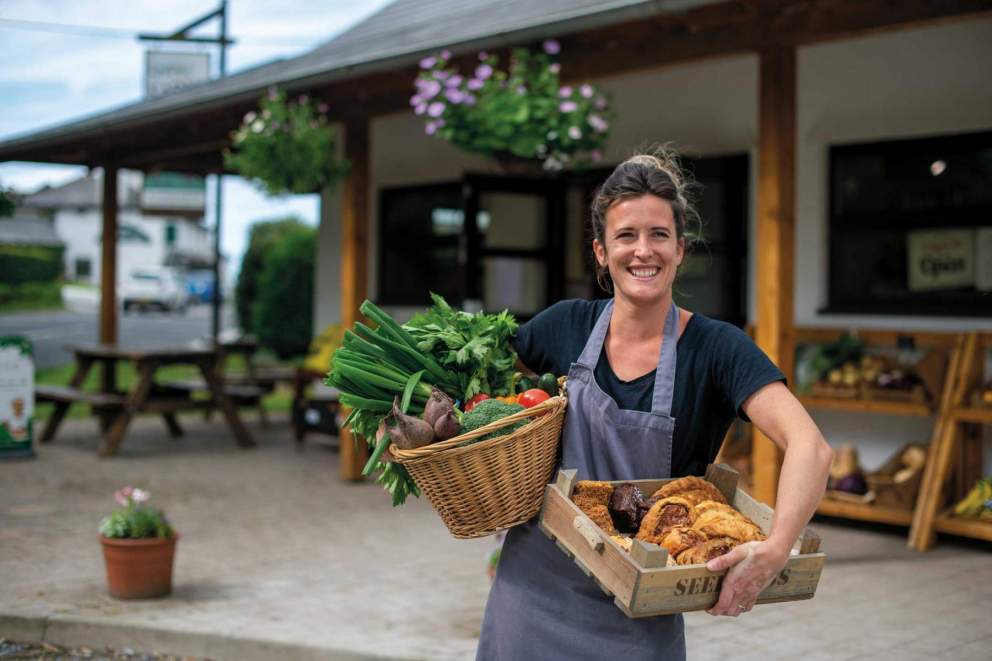 Our school cooks, fishermen, shop staff, producers and many more who work behind the scenes deserve a special shout-out in recognition of their passion and commitment to our thriving food industry. Here are just a few of them…

Marcia Vanstone (main picture), owner of Lydford Farm Shop, is committed to serving her local community. Since taking over the store on the western edge of Dartmoor in 2018, Marcia has made it her business to support local farmers and producers by stocking a wide range of produce from the area.

But to many residents in the small village, Marcia is much more than just a shopkeeper. She’s on first-name terms with many of her customers and regularly picks up the phone to people she knows who are isolated or struggling. Marcia even sent flowers to one villager who was having a difficult time. “This is such a community-minded area,” says Marcia, who also runs a catering business. “We all look out for each other. I’ve got a lovely team to work with. We’re more than just a shop.”

Jamie is the head chef and owner of this award-winning restaurant in Kingsbridge, and like many others, he’s struggled to recruit staff post-lockdown.

To encourage new employees to join his team, Jamie offered a £1,000 incentive to recruits to stay over the summer until at least the end of September.

He also launched the Twenty-Seven Academy to entice newcomers into the industry. Every Saturday over the summer, Jamie offered 16 possible chef positions and 16 front-of-house staff paid experience. “We would hope to take on a percentage of the staff who enrolled – if not all of them. I hope this initiative will be successful, and the Academy can become an established venture for school-leavers,” Jamie says.

Jamie has been working 18-hour shifts with his team to keep business ticking over and wants to take his restaurant to the next level. “I chose to focus on Twenty-Seven as it’s my ‘baby’. Following the nightmare of 2020, my concerted aim is to take the restaurant up a notch, by adding more finesse to our service and offering. It’s crucial that we have a steady flow of appropriately trained staff in hospitality for the business, the area, and the industry as a whole,” he adds.

Adrian Clark is a vital part of the team at Ashburton Cookery School. The chef’s assistant/kitchen porter makes sure staff and students have everything they need – often before they know they need it.

Adrian, 63, joined just after the doors opened in 1992 and has been welcoming students, washing up, preparing ingredients and assisting in the kitchen ever since. The chefs say he’s a real asset to the multi-award-winning school which now runs more than 50 courses. “Anything the chef needs, I’m here to do it,” says Adrian. “I help to keep the courses flowing. You have to think one step ahead all the time and you’re always watching, always listening.”

Adrian says his role has meant he’s built up a strong repertoire of recipes to make at home and loves cooking Mediterranean food. 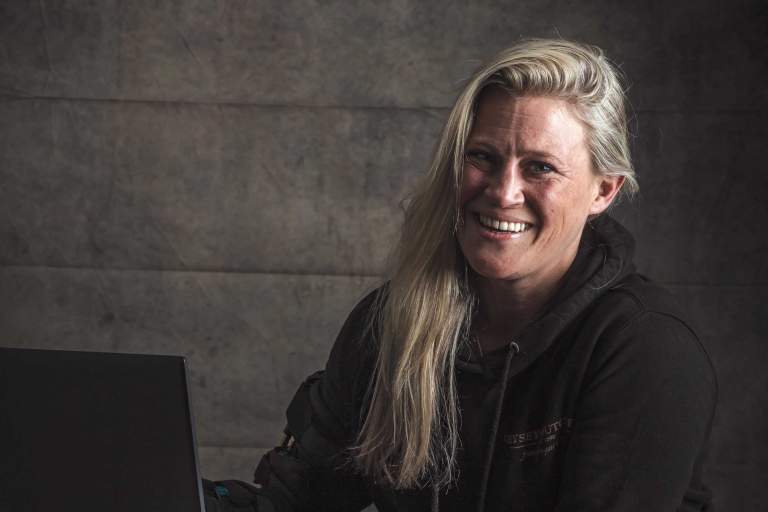 Ria Brighton works at the award-winning Veyseys Butchers in Cullompton. When lockdown hit, Ria helped to set up the 130-year-old firm’s new digital ordering system, securing the future of this much-loved family business.

Former car saleswoman Ria, one of only two women ever to work at Veyseys, suffered a debilitating arm injury during a car accident four years ago and struggled to find a job that would accommodate her needs. When her partner Phil Davey suggested she help out at the family butchers, Ria decided she was up for the challenge.

“It was great – it dropped me in at the deep end and I haven’t looked back,” she says, explaining how she uses a touchscreen to handle customer orders and deliveries. “I love being here,” says Ria, who has quickly built up a strong rapport with loyal customers, organising deliveries to the most vulnerable during lockdown. “If people can’t get to us, we go to them.” 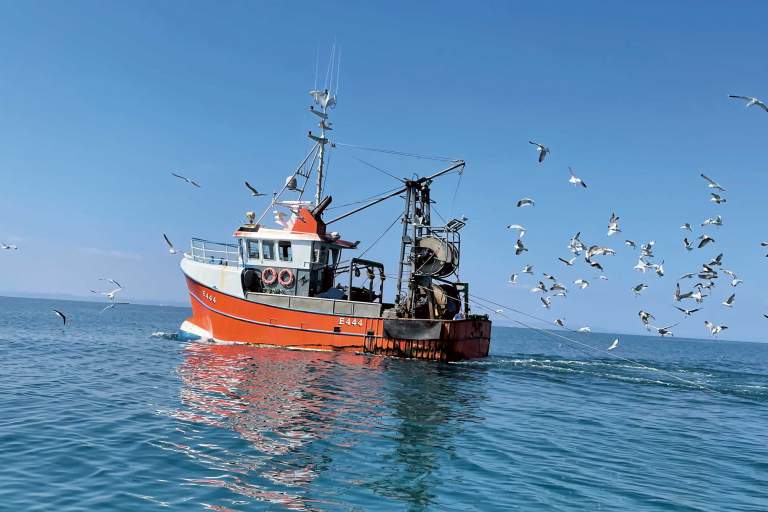 Fisherman Dave Driver is owner and skipper of Girl Debra 2, a Brixham trawler. Dave and his crew head out to sea in all weathers to help keep our restaurants and retailers supplied with some of the best seafood around.

A fisherman for more than 45 years, Dave first went to sea when he was just 10, helping his Uncle Raymond on his boat. The family has been fishing since the 1500s.

Dave, who grew up in Beer, has been awarded ‘Demersal Fisherman of the Year’ by Fishing News for his determination to improve the demersal fishing industry (which includes plaice, sole and turbot).

Dave says he can’t imagine doing any other job. “I think it’s the freedom that I enjoy,” he says. “You go to work and there’s no one in your way. Yes, it’s dangerous. You’ve got to know your limits and know what you’re doing.” New technology has certainly changed life at sea. “I’m a bit old school, still,” says Dave, who sets his alarm for 3.15am. “I let my son and son-in-law handle the electronic side of things. It takes me a bit longer!”

Sandra Lambert has put in more than 56 years of service behind the counter at Carters Delicatessen in Tavistock. She was a teenager when she began working at the historic local firm, which started life as a grocery store in 1881. Sandra, now 75, has seen the business change over the years, becoming Crebers and then back to Carters. She has held many different positions and served generations of customers. During lockdown, Sandra worked over her employed hours and helped deliver goods on foot to the local community. She won Food Drink Devon’s Employee of the Year award in 2020.

“I’ll keep working here for as long as I can,” says Sandra, who does a morning shift every weekday. “I love having the company and I know most of the customers.”

School catering manager Jennie Dingle has been feeding growing kids for more than three decades. When schools shut last year, Jennie joined an army of furloughed chefs and other volunteers to provide meals for NHS workers.

Under the Food4Heroes charity initiative, the team produced more than 600 meals for staff at the Royal Devon and Exeter Hospital. Jennie says the project helped everyone through a difficult time.

She has spent her career working in schools, starting at a boarding school in Taunton before eventually joining Stoke Hill Junior School in Exeter as a catering manager in 2008. “It’s a wonderful school,” she says. “The staff are truly amazing and a huge support to me.” Jennie admits, however, that her young customers are the best part of the job. “They’re always honest with their views on the meals! Many start to do the ‘school meals dance’, as I call it, as they near the front of the lunch queue in excited anticipation!” 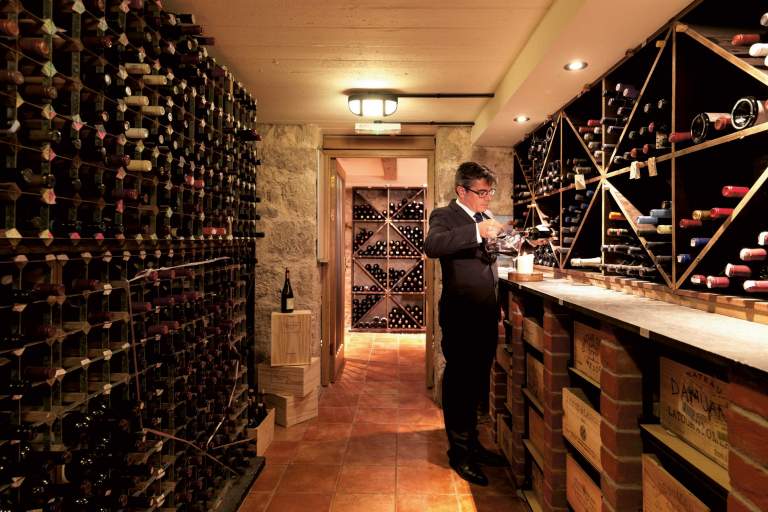 Alex Barrau is operations manager at luxury hotel and restaurant Gidleigh Park in Chagford. He is responsible for making sure guests are greeted on arrival, that the rooms are of a high standard, the gardens are beautiful and the restaurant runs perfectly. Before he took on his current role, Alex was head sommelier at the award-winning restaurant. He is still very involved with looking after Gidleigh Park’s wine cellar, home to one of the most impressive wine lists in the UK.

“My biggest challenge in the cellar, as always, is to find unknown but brilliant producers, so that our guests have new and exciting wines to taste,” says Alex, who first came to work at Gidleigh Park in the 1990s. “I get huge satisfaction from seeing our guests enjoy every element of their stay.”

Kat Wheeler and Joe Riley’s delicious sourdough has been the talk of Appledore since they started handing out home-baked loaves to locals last year. Since then, business has well and truly risen (sorry!) with the couple recently opening their first shop in Bideford to support growing online sales of bread and bagels.

The Appledore Bakery has become part of village life, with local shops stocking the sourdough and a delivery service for customers within a five-mile radius.

Residents say they are proud to have such a brilliant bakery and have praised the community-spirited couple. “It’s been really humbling,” says Kat, who handles sales and marketing, while Joe – who used to work in an award-winning pizza restaurant – bakes the bread. “It makes us proud every time somebody comes into the shop and says they like our bread. We’ve had some really lovely reviews.”