Harrison Brockington is head chef at Gather, a restaurant he helped set up when he was just 20 years old. Chrissy Harris finds out how Gather has grown 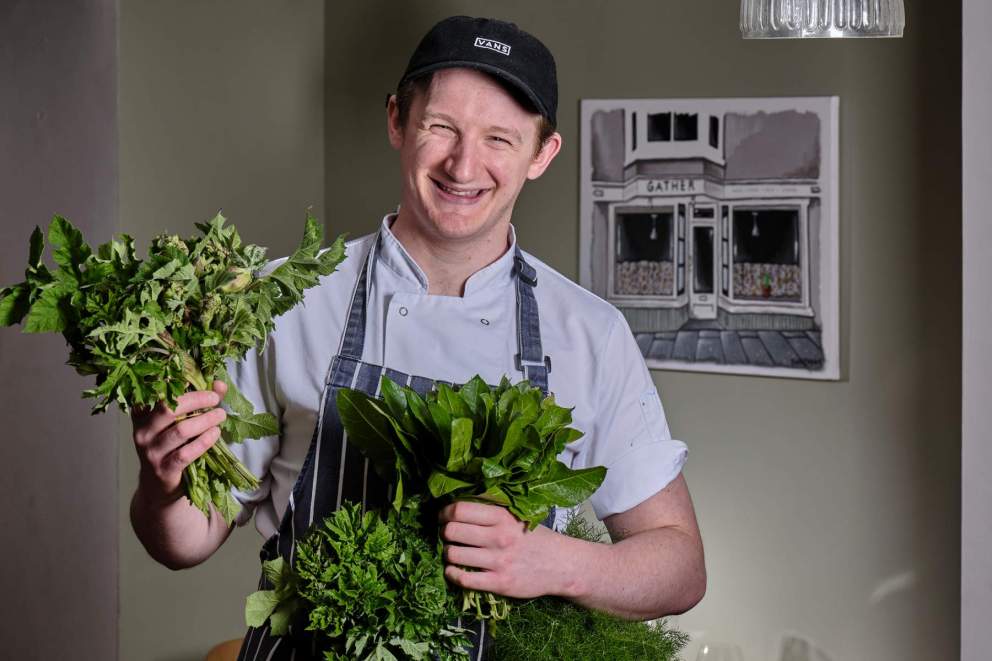 Most twenty-somethings are happy to let someone else do the cooking. Not Harrison Brockington. The 24-year-old is the owner and head chef at the restaurant he helped set up in Totnes to celebrate local and foraged ingredients when he was fresh out of college.

Gather opened in Fore Street in 2019 after former Exeter College student Harrison and a group of friends joined forces to create a fine-dining experience based on foraged ingredients.

Harrison and his young team had already run a series of successful pop-up restaurant events in Torbay and Branscombe in East Devon when they decided to take the plunge, encouraged and supported by staff from Exeter College. “We thought we’d just go for it,” says Harrison, aware that not many people his age go around setting up restaurants. “It was pretty hard at first, but we’ve settled into it now, we know what’s up a bit more,” he adds.

Gather prides itself on taking full advantage of the produce provided by our coast and countryside, serving dishes based on seasonal ingredients often foraged from very nearby. The team is passionate about the fact that their larder is the shoreline, fields, hedgerows, plus the produce from artisan farmers and growers in the region. “We change our menu every month and the idea is that everything has a time and place,” says Harrison. “The theme of the menu is the month we’re in. Some of the foraged ingredients we use only have a two-week window and then they’re gone for the rest of the year, so it’s nice to pick them while they’re out. To make the most of them, we preserve or cure them, whatever we think will work.”

Springtime leafy greens, fresh herbs and vegetables have been the recent stars of the show here, making way for wild summer fruits, including plums, cherries and strawberries. It won’t be long before we’re into the mushroom season. “It’s nice to pick things at different stages as well,” says Harrison, who makes the most of any opportunity to source his ingredients. “Take elderflower, for example. We’ll pick them, then pickle the little buds before they flower and then we’ll have elderflower capers. Once we move on to when the flower is in season, we’ll make cordials. When they go to berries, we can make pickles or preserves, and we’ve even made elderflower mustard before.”

Ideas as fresh as its ingredients have made Gather the talk of an already foodie town. Totnes has warmly welcomed Harrison and his young team who make the most of the producers and businesses on their doorstep.

A co-op of local allotments and suppliers provides some of Gather’s fruit and vegetables. Meat comes from local and long-established butcher Christopher McCabe down the road in Fore Street and fish comes from nearby Cormacks Seafood, which sells locally landed fish and shellfish. “We’re in such an amazing position here in Totnes and South Devon,” says Harrison, who grew up in Paignton and has just moved to Torquay. “It’s only right that we make the most of what we have here. I really like being in Totnes. It’s a busy, quirky little town.”

Gather already has a long list of regulars who enjoy coming in to see what’s on the menu and perhaps try something completely new. “I like that about what we do here,” says Harrison. Some customers will come in and really enjoy what they’ve tried, and then they might say they’ve got a lot of something growing in their own garden that they never know what to do with it. It’s nice to show and inspire people to use foraged ingredients in a fine-dining way.”

“We’ve got a few things that we come back to every year,” says Harrison. “The veg guy we use has a few walnut trees, so we make a walnut wine with the green walnuts every year. It’s a really cool thing to make.”

Making simple ingredients look and taste high-end is a special talent that only the best chefs are able to dish out. Harrison’s skills were recognised nationally when he recently appeared on the BBC hit show MasterChef: The Professionals. During his heat, Harrison made a salted hake loin with foraged sea herbs and a mussel butter sauce for his main and a warm chocolate tart with a herb chocolate mint ice cream for his dessert. The menu received high praise from the judges, but our home-grown chef just missed out on a place in the quarter-finals.

Harrison was able to put it down to experience and hasn’t let his brush with fame get in the way of what he’s doing – and how he got here. He’s full of praise for Exeter College and his tutors at the college’s Michael Caines Academy, which aims to nurture the region’s future generation of restaurateurs, chefs, managers, waiters and front-of-house staff. One former tutor, chef and forager David Beazley, has become something of a mentor to the Gather team, calling in most weeks to offer freshly found ingredients and any advice, if needed. “It’s great because we’re quite a young team, so if ever I’m stressed out, it’s nice to have his help and experience,” says Harrison. “We also still keep pretty good ties with the college.”

Harrison and the team at Gather take part in regular events with students, including sessions showing them how to run an evening service or dinner club nights. “They’re actually coming to us in a week’s time for a dinner club. They’ve booked out the whole restaurant for a reduced price and they’ll come and have a meal here,” says Harrison. “The college helped us quite a lot with our training when we were starting out so to return the favour is really rewarding.”

Lucky students. They get to dine with some of the best in the business – that’s a pretty valuable lesson. For now though, it’s back to the kitchen to see what ingredients the day has brought. “It is busy,” says Harrison. “But we want to stay that way, to focus and try to deliver a high standard with everything we do.”