The Taste of Taffety

With the future of Dartmoor’s iconic ponies in crisis, could they be saved if we adopt pony meat as a new Devon delicacy? 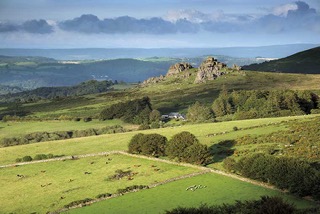 For many, the ponies of Dartmoor are emblems of the very essence of moorland life, with their wild, windswept existence summing up the harsh romance of the moors. Inextricably tied to the landscape, the ponies shape and are shaped by their environment. They eat the gorse that’s too gnarly for sheep or cattle to contemplate, and they trample bracken and brambles, maintaining the heathland that attracts birds and insects, and supports diverse wild flowers. Without the ponies, much of Dartmoor would be inaccessible to the visitors who flock to enjoy the landscape and to glimpse the ponies themselves.

So should we be horrified by the prospect of slaughtering these ponies for meat? Or should we be more horrified by the prospect of the ponies of Dartmoor disappearing altogether? Because the harsh reality is that the future of ponies on Dartmoor is on a knife-edge. The problem is twofold: overpopulation, coupled with the near-collapse of the domestic equine market. Natural England recommends around 900 ponies be grazed on the moor to maintain it. Previously, excess stock would have been sold for riding, driving or companionship. With demand for ponies nigh-on disappearing in the face of the global financial crisis, hill-farmers who own the pony herds have been forced to destroy around 400 foals a year. If there’s no way to make money from the ponies, hard-pressed farmers can’t afford to keep them. Many have already been forced to give up their herds.

Faced with such a stark future, the Dartmoor Hill Pony Association (DHPA) has come up with a radical conservation programme. Although it has certainly split opinion on the ethics of eating horsemeat, the plan is firmly committed to saving the ponies, protecting the moorland, supporting the farmers and maintaining Dartmoor’s vital tourist industry. The key is finding a way to keep foals alive until they’re three years old, by which time they are ready to be trained, to breed or to be slaughtered. By piloting contraceptive injections on older mares, the aim is to reduce the numbers of breeding stock and stop the population vastly overtopping the magic 900. This would mean foals (including fillies too young to breed) could stay in the herds until they were three. At that point, if there was no way to sell them on to be trained, farmers could still realise some profit from the ponies by sending them to slaughter.

Going by the name of ‘taffety’ (Devon dialect for ‘delicate on the tongue’), the meat so far produced by the Dartmoor Conservation Meat (DCM) project has been sold either online or at Tavistock Farmers’ Market. Local support for the project has been such that meat sold out before Christmas and there’s now a waiting list of orders. In many ways taffety is similar to venison – it’s a robust, red meat from an animal that has lived a natural, low-stress and drug-free lifestyle and eaten a diet untainted by chemicals. Because the ponies work hard on the moor, roaming as they graze and enduring tough weather conditions, the meat is lean. It’s also high in protein and in beneficial omega 3 fats. With a subtle, gamey flavour, taffety is similar in texture to beef, but slightly sweeter. It lends itself to being cooked as you would any decent piece of red meat, with ‘show-off’ cuts like good roasting joints and steaks presenting the meat’s flavour at its best. For the short-term, however, sausages and burgers are likely to be more commercial, at least until consumers get their heads around what they’re eating.

It’s important to note that Dartmoor Conservation Meat is not about mass-market meat production. Perverse though it may seem, this is a project run by horse-lovers, not retailers. The overall aim is to manage the number of ponies so they can do the job the moor needs, not to breed more. So the ponies that are slaughtered at the age of three are the same ponies that could previously have been destroyed as foals under the age of 12 months. Ideally, if the programme of population management works, the necessity to slaughter ponies will be kept to a minimum, making the meat a high-end delicacy, not a supermarket staple. And with provenance better than most meat you’ll buy (DHPA has strict rules regarding which animals can enter the food chain) and the knowledge that the animals are slaughtered by a small, local abattoir that deals compassionately with ponies, welfare standards are certainly as good as, if not better than, those experienced by pigs, sheep and cows.

Charlotte Faulkner, founder and secretary of the Dartmoor Hill Pony Association, has one ambition: “We do not wish to see foals shot in the year of their birth any more – this project could change that.” Without question, it will take a considerable effort for us to swallow our emotions over the eating of horsemeat. But if the project is high-welfare and is run with sensitivity, if it secures a future for an animal which is an icon not just of Dartmoor, but of Devon and the whole of the UK, it must surely be worth a try.