A flurry of independent local burger restaurants are giving the big chains some food for thought, writes Lucy Baker-Kind 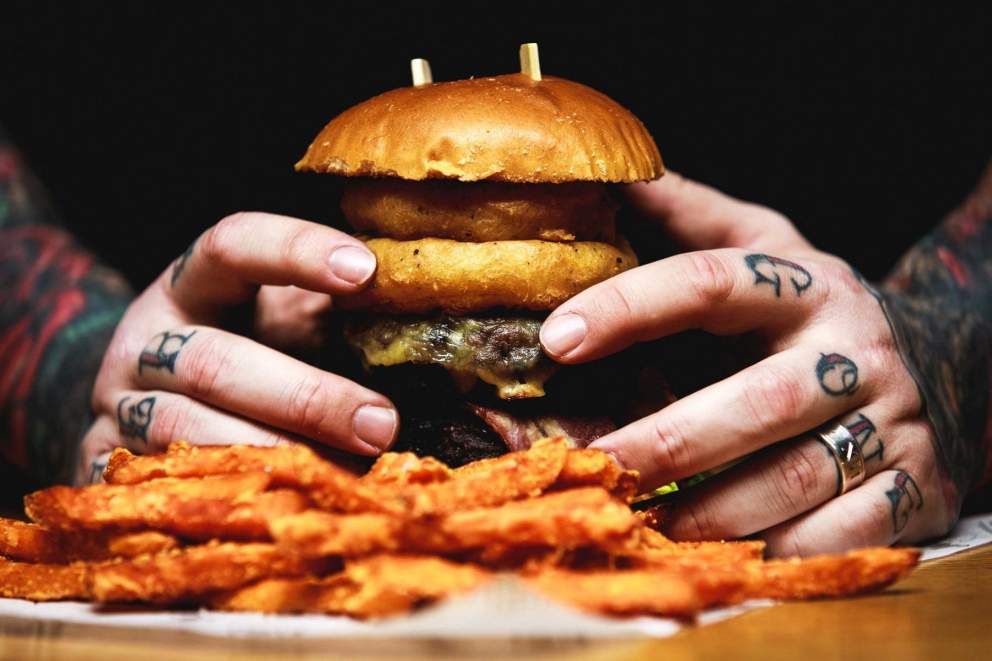 The burger is having a revival, with new, independent outlets serving up melt-in-the-mouth local meat and produce, from traditional beef to more exotic combinations.

One fine example is The Pig and Pallet in Topsham. This charcuterie/butcher/deli/BBQ/diner/café is a one-stop shop for all things meat! Co-owner Steve Williams is proud of the fact they start right at the beginning of the food journey, by using meat from their own pigs and making/curing the majority of it themselves, within The Pig and Pallet’s sister company, Good Game: “We pretty much only work with local produce and buy from people we know. I try to avoid mass factory-produced anything and want to support a business that produces in the best possible way.”

The Pig and Pallet’s best-seller is the Devon Ruby Steak Burger, which only has three ingredients, one of which is beef: “Our burger is healthy as it is low in fat and contains no additives, preservatives or nitrates. It’s pure protein.” Steve favours a robust corn bread bun to accompany his burgers.

For vegetarian customers, Steve offers a mushroom, cold-smoked halloumi (made in-house) and tomato burger, or a falafel, hummus and yoghurt burger, both of which sound tempting enough for the most die-hard meat eater.

To give his regulars a taste of something new, Steve offers ‘guest’ or ‘theme’ burgers – the Rabbi Burns was up for grabs on Burns Night, incorporating haggis, black pudding, whiskey, BBQ sauce and turnip slaw. The seasonal Fat Santa is made with pulled turkey thigh, sausage meat patty, stuffing patty, celeriac and sprout remoulade, BBQ sauce and cranberry sauce.

Local origin is of equal importance to Matt Spencer, owner of the Bull & Bear in Barnstaple, who sources most of his ingredients from suppliers within a 10-minute walk of the restaurant: “I’d rather pay a little more for higher quality produce with local provenance. I think it’s really important to use sustainable, responsibly sourced products and to support the local community.”

The Bull & Bear’s menu is built around a Build Your Own Burger concept, where customers choose their burger, bun, salad, cheese, topping and sauce to make it truly individual to their tastes. “We have around 750,000 different possible combinations,” claims Matt. “We’ve topped burgers with everything from lasagne, chimichangas, pizza and mac ‘n’ cheese, to fried banana and peanut butter and our legendary 15 Shades of Bacon burger (15 different types of bacon in one burger) that we make every so often in aid of the North Devon Hospice.”

Matt adds: “All our food is made in-house, from the hand-pressed beef burgers and home-made chilli to the smoked meats (smoked on site) and house-made sauces. So we know exactly what goes into everything!”

Another outlet insisting on local produce is Hubbox, which started out life in a shipping container and now has Devon branches in Plymouth and Exeter. Tom Sutcliffe, general manager of Hubbox Plymouth, goes to a nearby supplier for his beef – select cuts of 21-day aged, rare beef farmed on the moors on the Devon and Cornwall border: “Hubbox prides itself on sourcing the best local ingredients and working in partnership with and supporting local suppliers and producers.”

Tom’s customers are fans of the signature Hub burger, which consists of a 6oz beef patty, with crispy smoked bacon, Swiss cheese, Hub sauce and salad, in a brioche bun. Another Hubbox favourite is the Big Kahuna – two 4oz beef patties, together with 12-hour in-house smoked BBQ pulled pork, Swiss cheese, BBQ sauce, mayo and salad. Its claim to fame is that it won the first ever National Burgers Award in 2015.

Adam Shields, general manager of Byron, which has an Exeter restaurant, also agrees that you should let the food do the talking: “We make proper hamburgers using carefully sourced British beef, ground fresh, cooked medium and served in a squishy bun with minimum fuss and fanfare.”

For meat-eaters, try the best-selling Byron burger with dry-cured bacon, mature cheddar cheese, salad and their own sauce. “If you like the sound of one of our beef-based burger creations but don’t want meat, simply swap out the beef patty for our bean patty or a Portobello mushroom,” recommends Adam.

In terms of accompaniments, courgette fries have been a staple on Byron’s menu for 10 years, and Adam recommends serving them with the homemade blue cheese sauce.

Meat 59, with restaurants in Torquay and Exeter, is another must-visit. James O’Sullivan, general manager, says: “The idea of using businesses nearby helps to boost the local economy and we can promote them and their ingredients. We have found that when using local suppliers, you get the benefit of personal touches and advice.”

The Meat 59 crew put on monthly specials, with the Meat 59 burger proving popular – a hand-pressed patty, black pudding, chorizo and pulled pork. A root vegetable patty, halloumi, slaw and chilli jam is another mouth-watering alternative. “We spend a lot of time creating our combinations and we think it shows on our menu,” says James.

The final tip for creating the perfect burger goes to Steve: “Make them out of proper meat and make them taste like meat!”