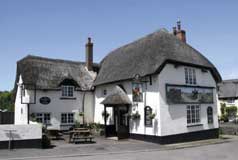 Playing a key role in Ide life since the 16th century, The Huntsman Inn has ‘local’ art the heart of its ethos, writes Belinda Dillon

In the homely bar-cum-dining room, the board on the wall at The Huntsman Inn announces the proximity of this week’s ingredients – the beef has less than a mile to travel from West Town Farm – and it also reveals that the pub’s village neighbours are more than just regulars: they’re often suppliers, too. The rhubarb in the compote on the lunchtime menu comes from ’Ted and Sue’s garden’ up the road, and the chap directly opposite provides produce from his garden, including basil, sage, artichokes, chillies and quinces, as well as pears and apples.

Since taking over in 2011, Mark – who’s been in the business since he was 16 – has been committed to delivering something a little out of the ordinary at The Huntsman Inn.

“We like to think our food is a step above the usual pub fare, and we pride ourselves on doing things a little differently, so we’ll serve hogget rather than lamb, and offer fish that’s not often seen on menus, such as wrasse.“ Instead of rump, meat fans can tuck into Butler’s cut steak, which is from the blade, full of tender, beefy flavour – connoisseurs will tell you it’s a winner on taste.

Working closely with the chef, Mark changes the menu every six weeks, always in response to seasonality and food miles. Looking to the future, he hopes to add more game and fish, on what is an already democratic menu – there really is something for every palate, and vegetarians are well served.

Proceedings got off to a comforting start with my thyme-roasted field mushrooms, which were sweet and earthy. Across the table, the husband’s beef carpaccio came with a wasabi mayonnaise that delivered just the right level of nasal-cleansing friskiness.

As my first introduction to hogget – an overwintered lamb aged between 12 to 18 months – my main course was a game-changer: deliciously firm and flavour-packed, the meat spoke volumes about the extra time the beast had spent roaming the land, and the accompanying mint and caper sauce was a tangy delight. The husband was similarly confident about the previously happy life of his duck, which came with a generous portion of red cabbage that had a lovely aniseedy zing.

For dessert I plumped for clafoutis, a sublime French baked pud which here swapped raspberries for the more customary cherries, producing a satisfying tartness that was the perfect counterpoint to the wobbly batter. Himself had a dark chocolate and passion fruit delice, the last word in decadence. Divine.

So cosy were we beside the roaring cast iron stove, enjoying the friendly vibe and the post-prandial contentment, that we were loathe to leave. So we didn’t; we ordered more wine – a great value Chilean merlot – and tucked into the cheese board. Never let it be said that I don’t do my bit to report back from gastronomy’s front line, dear reader...