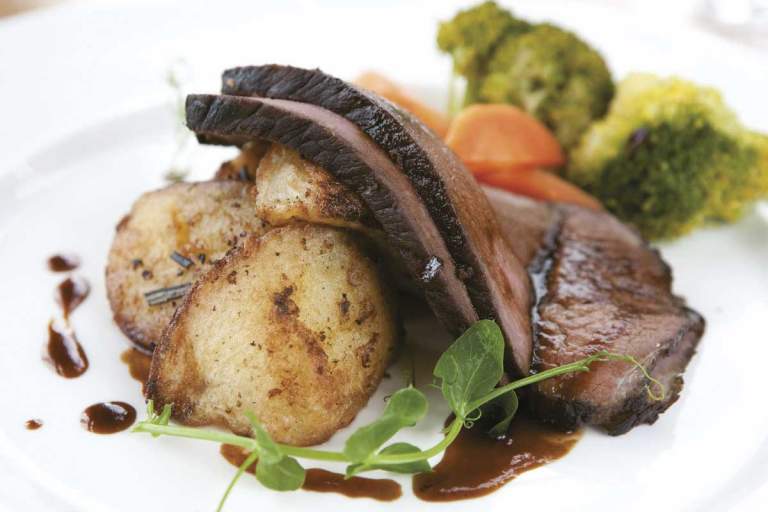 This is a classic Torquay hotel. The dining room is huge, elegant and adorned with oil paintings. It is called Restaurant 1881, the year that this quintessentially English hotel was opened. You could easily imagine Agatha Christie eating here.

My family and I thoroughly enjoyed the four-course Sunday lunch here with a view of the sea and outdoor swimming pool from the nearby window. Several people were even eating outside on the terrace.

The service was impeccable. The waiting staff were smiley, chatty and on the ball. They kept offering us a tempting basket of bread rolls – we were happy to partake, choosing both the white and granary.

There was live music from a keyboard player in the restaurant, which was very relaxing and added to the calm ambience.

Back to our table, and two of us chose the ham hock with baby leaves as a starter – this was well made and presented, and quickly devoured. One of us had the rich and savoury mushroom soup with croutons, while the fourth party member had the local mussels in a creamy sauce. These were described as being “delicious” and the sauce was mopped up with a bread roll.

We shared a bottle of red wine, Californian Zinfandel, and a bottle of carbonated water. The fruity and rich red had vanilla notes, and the waiting staff were attentive in keeping our glasses replenished.

This four-course menu includes a palate-reviving sorbet in between the starters and main courses. We were served a mango flavour, of which everyone was unanimously in favour, and it provided a welcome refreshment.

We didn’t have to choose a roast lunch – there were other options, including a tempting fish dish – but we did all eventually decide on traditional roasts. Two of us had the beef, while the others plumped for pork. The beef was really well cooked; Executive Head Chef Scott Harrison-Jones obviously runs a tight ship. The meat was nicely browned on the outside with a hint of pink within. The crispy roast potatoes were served alongside plenty of seasonal vegetables (carrots, mange tout and tenderstem broccoli).  The gravy was excellent, too; it was very fruity and I asked for a second jug of it, making sure to use my bread to mop up every last drop!

Between us, for dessert, we tried the chocolate tart with raspberry sorbet, the panna cotta with cinnamon palmier biscuit and the mixed berry Pavlova. They were equally delectably indulgent, and a proper end to this hearty four-course feast.

This is the place to come for a relaxed and civilised Sunday lunch, with the option for an afternoon stroll along the seafront afterwards. Rumour has it, the afternoon teas are worth coming back for, too!