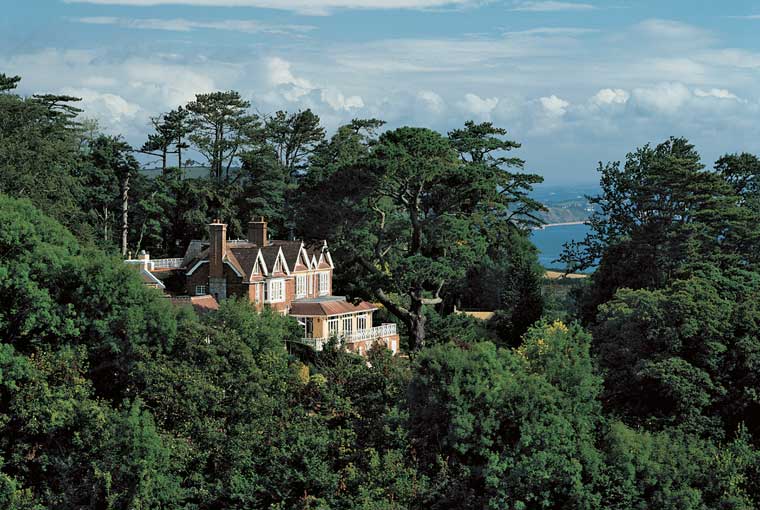 Stacey Sheppard visits the elegant Orestone Manor, whose kitchen garden supplies some of the ingredients that make up an exquisite menu

Having heard good things about the restaurant at Orestone Manor and its enviable reputation, my expectations were set pretty high. Situated in Maidencombe on the coastal road from Torquay to Shaldon, the Edwardian country house hotel is set in extensive grounds overlooking part of Devon’s beautiful coastline.

When we pulled into the car park, my fiancé remarked that there was an immediate feeling of grandeur, but as soon as we walked in we were met by Laura and Craig who instantly made us feel very welcome and relaxed. Craig is the son of Neil and Catherine d’Allen, who took over ownership of the hotel in July. We were seated in the bar area, where a large open fire crackled comfortingly in the corner and big cosy sofas beckoned invitingly.

When offered pre-dinner drinks, Craig helpfully suggested we take a look at the extensive cider list, which featured a proliferation of local brews. My fiancé opted for a bottle of Hunt’s cider, which, Laura explained, is produced on a family farm just outside Paignton.

Using local produce is very important and the Head Chef, Daniel Morris, sources many of his ingredients from local suppliers or from the kitchen garden in the grounds, where Paul, the gardener, grows herbs, fruit and vegetables for the restaurant.

After pondering the menu for a good few minutes I opted to start with the confit duck and foie gras terrine served with spiced apple and toasted brioche. It was a melt-in-the-mouth taste sensation and the spiced apple complemented the flavours of the terrine perfectly. For my main course I chose the line-caught Brixham sea bass, which was cooked to perfection and served with the most delicious chestnut gnocchi. My fiancé enjoyed an excellent velvety celeriac and white truffle soup, followed by roast duck served with a flavoursome pumpkin and caraway purée, chicory and a rich wine and sultana sauce.

Feeling quite satisfied, we decided to share a cheese board for dessert and were able to sample some of the West Country’s best offerings accompanied by grapes, chutney and quince jelly. We chose a light and crisp local rosé wine from Kenton Vineyard, which Craig had recommended, to accompany our meal.

The food was delicious and the friendly relaxed atmosphere made for a perfect evening. Both Craig and Laura were extremely helpful and their exceptional knowledge of local produce led to some great recommendations. We’ll certainly be heading back there soon to see what else they recommend.