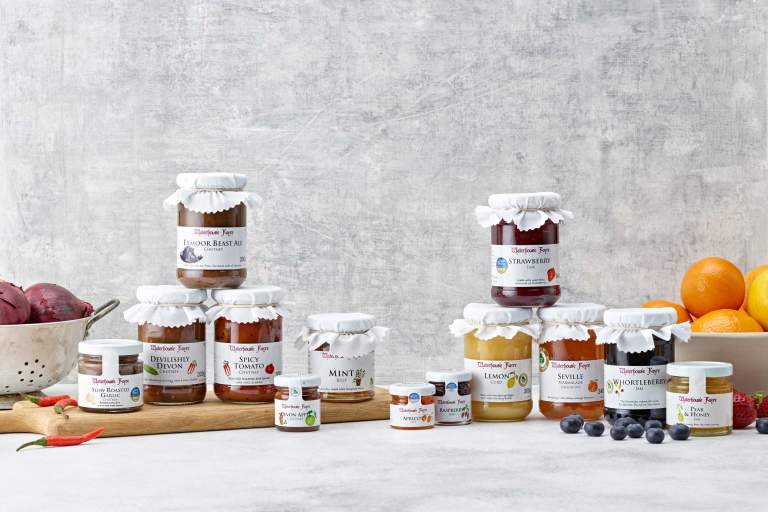 Waterhouse Fayre near Tiverton has been winning awards since day one. Taste Buds talks to owner Ann Stallard about its success

When Ann began making jam in her kitchen from home-grown produce back in January 2004, it was initially a way of using up surplus raspberries. Waterhouse Fayre preserves can now be found throughout the West Country; in farm shops, delicatessens and branches of Mole Valley Farmers. Waterhouse Fayre’s first award was in that inaugural year – a Taste of the West Gold for its Raspberry Jam.

Ann has won numerous awards since her first year, with 2016 being the most successful. In the recent Taste of the West Awards, Ann placed in all seven entries. Gold for two new chutneys launched in 2019, both recipes were created by Ann – Slow Roasted Garlic Chutney and Whortleberry Chutney. The Victoria Plum Jam not only achieved gold, but was shortlisted as a regional finalist. Further successes included the Apricot Conserve and Strawberry Jam winning silver, and Blackcurrant Jam and Raspberry Jam achieving highly commended.

Ann says: “I’m committed to sourcing first-class produce and cooking in small batches. I place great emphasis on quality ingredients and will always try to source locally. Over the years, I have also built strong relationships with growers in the West Country to support this.”

Waterhouse Fayre has relocated from South Molton to the outskirts of Tiverton, where custom facilities were added to the family home. The new premises allow Ann’s family-centred team – husband Neil and niece Lucy – to continue developing and producing these champion products.