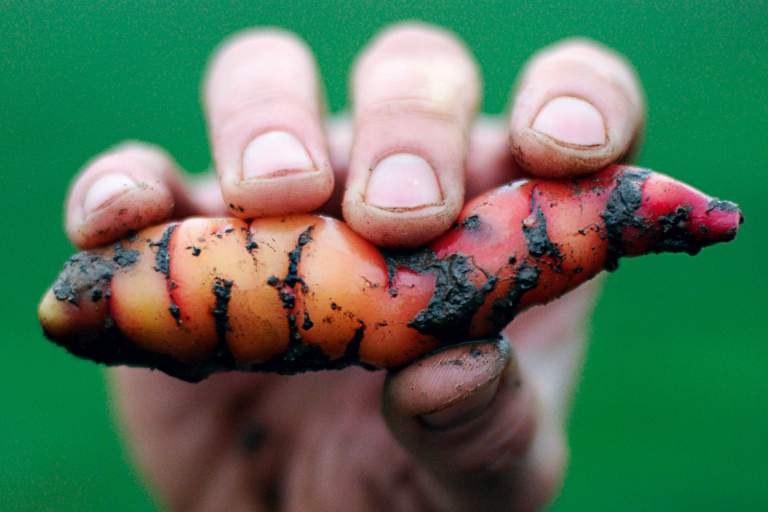 Otter Farm is situated on the banks of the River Otter near the traditional farming town of Honiton. Before the farm was established in 2005, the 17 acres of former county council farmland that it occupied were in pretty poor condition. Today the land boasts the UK’s only climate change farm. The brainchild of Mark Diacono – a Devonian who had been living and working in London as an environmental consultant – Otter Farm has the potential to revolutionise the British larder.

Explaining the reasoning behind his climate change farm Mark says: “The idea started with the aim of producing a good number of small commercial harvests, which is still at the centre of what happens at Otter Farm, but it has broadened to be about widening the sorts of food that we grow for ourselves in our gardens and allotments by discovering many of the delicious foods we aren’t familiar with in this country.

“I made a list of all the food I liked and knocked out all those that are impossible to grow in this country. I was left with a list that was mainly forgotten fruit, such as mulberries and quince, that we used to love but have largely stopped growing, and food that was marginal but that with climate change might be possible, like apricots and peaches.”

Over the past few years climate change has worked its way up the environmental agenda and is now an issue taken seriously and something that farmers, growers and land managers cannot ignore. For Mark, this presented the perfect opportunity to take action and set up his climate change farm. “By taking advantage of climate change to grow delicious low-carbon crops that would normally be sourced from overseas, you are helping to arrest the advance of climate change,” explains Mark. “Food accounts for around 30% of people’s carbon footprint and finding a low carbon way forward in the way we feed ourselves is a vital step in halting the march of global warming.”

By avoiding importing crops from overseas and growing some himself, Mark is hopes to reduce his impact on the environment. ‘Food miles’ is a contentious issue that is often blamed for its high carbon footprint, but according to Mark, this is not the most worrisome concern. “Inorganic production, with its use of high-energy fossil fuel-based inputs is by far the most damaging aspect of our diet”. In fact, as Mark points out, a ton of manmade nitrogen fertiliser uses one ton of oil and 8 tons of water to produce, and it releases nitrous oxide, a greenhouse gas around 300 times more powerful than carbon dioxide, as it breaks down.

Therefore, sourcing locally grown, organic food is something that Mark believes can help to reverse the effects of both food miles and the use of manmade nitrogen fertiliser. But there are other benefits to be gained from buying local produce. “Sourcing locally, works on so many other levels too – by keeping your money within the local economy, you are hopefully contributing to the continued existence of producers who grow produce in the right way that benefits the local environment,” says Mark.

All the crops that Mark grows are perennial plants that take time to grow and become productive. He started planting them five years ago, but just as some things look encouraging, others tend not to do so well and are therefore replaced. Some of the things that Mark does grow include pecans, apricots, szechuan peppers, almonds, and grapes, some varieties of which haven’t been grown in this country before.

For Mark, it’s not about totally abstaining from foods grown on foreign soils, but more about obtaining a balanced and sustainable diet where possible. “There are brilliant English alternatives to many overseas foods,” says Mark reeling off rapeseed, help oil and English wines in quick succession.

The main challenge that he has to deal with is not the winters but surprisingly the summers. “Many crops need a reasonable summer to put on new growth and to harden the wood, and a couple of so-so summers haven’t been ideal for them,” says Mark. “The original almond varieties weren’t up to the combination of a few ordinary summers and a couple of harsh winters so early in their lives, so they’ve been replaced with other varieties. Some of the olive varieties have fared better than others, so we’ll be planting more of the happiest ones,” he explains. But a few failed harvests won’t put Mark off and he tells me that this year he has already started planting a few new varieties including American bladdernuts, heartnuts, Himalayan rhubarb and mirabelles.

For the moment, the harvests – when they are producing – are quite small, so Mark gets the pleasure of eating them, and if there’s any surplus he gives it away to a lucky chosen few who he would like to supply when the harvests increase.<

Apart from running Otter Farm, he also leads the garden team at River Cottage and runs various courses there. “It’s a lot of fun. It’s a very creative, lively place to work, which attracts thousands of people every year who are keen to enjoy the River Cottage approach to food and its provenance.” he explains.

“Food is at the core of being alive, of family and society. How we choose to feed ourselves says much about who we are as individuals, as a region, a country and a species. I’m lucky enough to live in an amazing part of the world, spending most of my time growing and writing about food - it makes me very happy, but a lot of the pleasure is in seeing the difference having a better relationship with food makes to people’s lives. There’s nothing I’d rather be doing.”