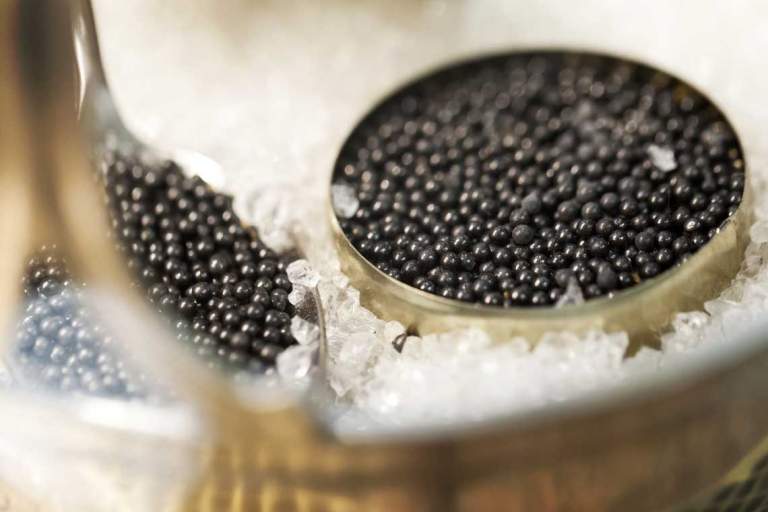 As the UK’s first caviar farm goes into production in North Devon, Anna Turns discovers how this luxurious delicacy is sustainably produced

An exciting new Devon-grown luxury food hits the shelves this Christmas, as the Exmoor Caviar Company produces its first full harvest of unfertilised fish roe cured with Cornish sea salt. North Molton-based sturgeon farmer Patrick Noble is excited about his new venture: “There’s a big demand for British-farmed caviar, especially from Michelin chefs like Michael Caines and Nathan Outlaw, and curing it with Cornish and Hebridean sea salt sets it apart from other caviars.”

Patrick Noble and his son, George, were approached by Kenneth Benning of Shah Caviar, a premium caviar retailer and wholesaler that is part of the London Fine Foods Group. Keen to create UK-farmed caviar, Kenneth has worked closely with the Nobles since 2010 to develop the country’s first and only caviar farm, the Exmoor Caviar Company. “We aim to produce caviar that will be internationally recognised as one of the kings of the culinary table, without being ostentatious,” says Kenneth.

Devon seafood chef and restaurateur Mitch Tonks is a big fan. “Exmoor caviar is among some of the finest I’ve ever tasted and it’s a unique product from a sustainable source,” says Mitch. “I would love to see Devon sturgeon caviar on our menus and when served properly it is utterly delicious, soft in texture and bursting with flavour.”

Patrick explains: “Most of the caviar consumed worldwide is now from farmed sturgeon. Bans on catching wild sturgeon in the Caspian Sea due to overfishing and unsustainable practices have resulted in the development of aquaculture to farm caviar.” Since 1990, Patrick has bred salmon and trout in tanks, and more recently specialised in sturgeon, originally for the ornamental pond market. Eight million gallons of water from the River Mole flow through the tanks, giving a more natural habitat for the sturgeon compared to fish farms on the continent, which rely on recirculation.

The price tag goes hand-in-hand with the lengths it takes to produce caviar, as it’s a slow, complex process. Roe is extracted from female sturgeon once they reach reproductive maturity, anything from six years upwards. “Hopefully, our first harvest will yield 50-100kg of caviar and it looks promising,” says Patrick, who is farming two sturgeon species. “We farm the ecologically sound Siberian sturgeon (producing small, dark-grey caviar eggs) and the infamous Russian sturgeon (producing steely brown-grey, larger caviar eggs).”

There’s a great deal of controversy associated with the surgical extraction of roe from live sturgeon. At the Exmoor Caviar Company, Patrick and George test the fish a few weeks before harvest to check the ripeness of the eggs. Once these are ripe, the fish are held in pure spring water for two weeks to clean them, before being harvested to extract the eggs. The peak harvest season runs from September to April, because eggs stay in pristine condition until the water temperature rises. “We’re doing with sustainability and compassionate farming in mind,” says Patrick. “Through Shah Caviar, we already have a good wholesale market in London for the flesh too, so apart from the bones and the head, nothing gets wasted, and we’re looking at making smoked fish products and pâtés.”

As primary producers, Kenneth and Patrick have full control over every stage, from farm to fork. “We guarantee this is the freshest caviar you’ll ever taste,” says Kenneth.