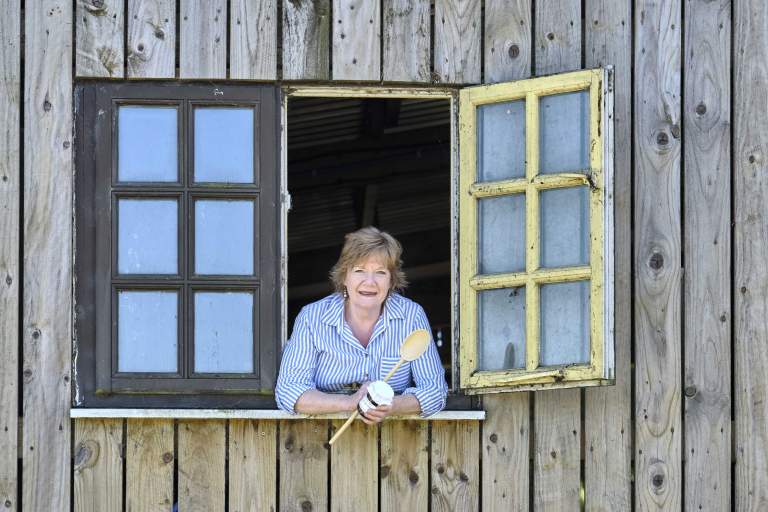 From her base near Tiverton, Ann Stallard runs Waterhouse Fayre, producing award-winning jams, chutneys and preserves in small batches

How did you get into growing fruit? Was it something you were interested in from an early age?

No! I was brought up in Hong Kong for the first 20 years of my life and we didn’t even have a garden. I remember being at college and a cook in the kitchen was preparing something black and round. I thought they were elderberries, which are poisonous, but they turned out to be blackcurrants. I was more familiar with things like mangoes, papaya, dragon fruit and lychees.

How did you get into making jam?

We were living in South Molton and I was working in Burnham-on-Sea, so I spent four years driving up and down for two hours a day. We had seven acres of land, so we decided to plant some fruit and grow something special – blackcurrants and raspberries for catering and restaurants – with a little pick your own as well. It was my retirement plan! The restaurants wanted the best fruit without blemishes, and people doing pick your own only collected the fruit at eye level, so I needed to do something with the rest. I’d never made jam before so I was a bit green when I went into it.

Was it an early success?

I made all this raspberry jam, so I decided to take a market stall in South Molton – our first one was on 31 January 2004. I also made half a dozen different products to sell, and it went from there. That first year, I decided to enter the raspberry jam in the Taste of the West Awards and we won Gold. Then we moved here, near Uffculme, in 2016, and we’ve grown two-and-a-half times since we were in South Molton.

Do you still make everything in small batches, even though you have a commercial building?

We do make it in small batches of 20–24 jars per pot. Last year and the year before, we were making around 600 jars a day, but we’ve improved efficiency and we’re now making nearly a thousand jars a day. We like developing new products and flavours… and names. We had a green tomato chutney and made 60 jars a year. One of our stockists in Dunster asked us to create something not quite so ‘Devon’. So we came up with Exmoor Pond Weed Chutney. It sold 2,500 jars and won a Taste of the West Gold. It just grew and grew. We also worked with Exmoor Ales on an Exmoor Beast Ale Chutney, which goes in our Exmoor Gift Box and has been very popular.

And what about your cream tea in a box?

My mother was sent a Devon cream tea in a box and it was dire. The jam wasn’t great, the scones were mass-produced and the cream was pre-frozen. So we made our own – with our jams, the scones I baked and Devon clotted cream. There was a gluten-free option too. They did really well.

For the last two years, I’ve been working on a no added sugar range. The strawberry jam has 80% fruit and only 5% of natural sugar. We pride ourselves on keeping the sugar content as low as possible, but if it gets too low, the jam gets mouldy. It’s completely different. The jam may not be as sweet, but it’s packed with flavour.