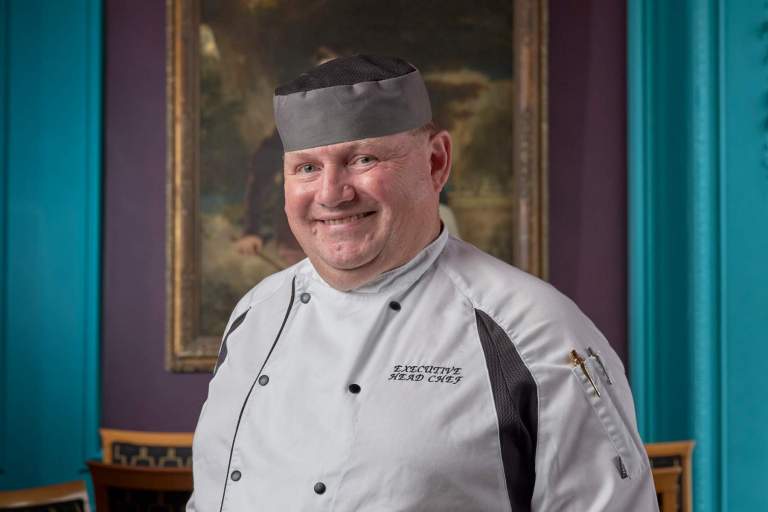 Why did you become a chef?
My father-in-law was a chef in the RAF and he was my biggest influence. I met my wife, Alison, when we were 13 years old and were married at 21. Her father, Alan Williams, taught me all the fundamentals of cooking. He’s in his eighties now but he’s always followed my career. He was the one who encouraged me to go to college.

Where did you train?
I started my career when I was 15. I grew up in a village just outside Bournemouth and went to Salisbury College of Technology. When I left, I did extra courses – I’ve got a list of qualifications as long as your arm! I started my proper chef work at the Royal Bath Hotel in Bournemouth in 1984-5. I think I’ve worked in all the major hotels in Bournemouth during my career.

When did you come to Torquay?
Me and my wife honeymooned in Torquay in 1987 and we always wanted to come back.

I did my first stint at the Imperial Hotel in 2007 but family commitments meant I had to go back to Bournemouth. Then I came back to The Imperial before getting the job at The Grand two years ago.

What do you enjoy about being down here?
It’s the English Riviera! It’s fantastic and there are some wonderful people to work with. And the local produce you can get down here is great.

And The Grand – that’s one of ‘the’ hotels in the English Riviera, isn’t it?
It is. I love hotel work, especially big hotels. I have done restaurant work as well but hotel work is a completely different animal.

What do you enjoy about it?
It’s just the energy, from breakfast right through to dinner. I mean, we can often cater for around 300 for breakfast, and 100 plus for dinner during the summer months.

What’s it like in the kitchen with that kind of workload?
It’s a big buzz. It is - and I’ve got a great team behind me. I’m the Executive Chef but I’m only as good as my team.

Would you say you had a certain style?
I change my styles around, really. I like to keep current. As chefs we are artists, we’re not just cooks. We create dishes and make them look like a piece of art on the plate. It’s the creativity in chefs that is needed.

What do you like eating?
I love lamb. It’s got to be English, and local, preferably. But cooking at home-wise, it’s got to be very simple dishes. People laugh but my favourite dish is - and this is quite strange - but I love baked beans on toast with a fried egg. And the beans must be cold!

What next?
I’m here at The Grand for the duration. I can see myself developing here because you learn something new every day. Even the young kids that are coming through can teach you - you’ve got to be open minded as a chef.