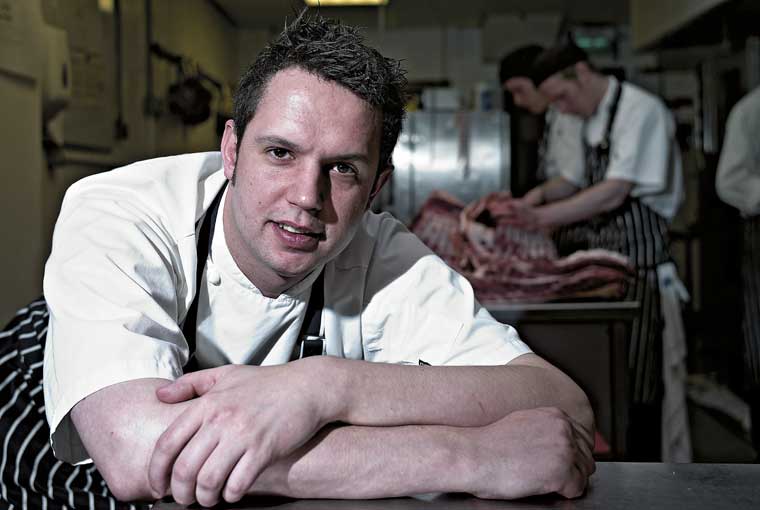 Marc Hardiman has worked as a chef throughout the South West of England, the Cotswolds and London for the last 13 years. He recently took the reins at Bovey Castle where he oversees The Edwardian Grill and Castle Bistro.

What or who influenced you to become a chef?
I used to spend time at my gran’s house baking cakes and cooking, and both my grandparents worked in the industry. These things played a major part in deciding to become a chef. No one makes a Sunday roast as good as your gran.

You started your career at the Castle House Hotel in Hereford where you worked under Stuart McLeod. How did this early experience affect your approach to cooking?
Starting my career cooking for Stuart really honed my skills. He helped me recognise the importance of detail and flavour – understanding what you’re putting on the plate and not just putting it on for the sake of looking pretty.

You have said that you aspire to be like Marco Pierre White. What is it about his style that you particularly admire?
His approach to cooking: great produce, cooked simply. I also admire his passion, confidence and dedication.

You took part in the Gordon Ramsay Scholarship, becoming a finalist in the competition and cooking for a television audience at The Restaurant Show. What was this like?
I think I was the youngest finalist and that and cooking live is very daunting, but the pressure was a good learning experience. In some ways you have that pressure every day in the kitchen. Customer expectations at Bovey Castle are high and I am constantly trying to exceed those expectations.

How did you end up working at Bovey Castle?
After three years in my last job, I decided I needed a new challenge. I wanted to work at a larger property but also one that shared my culinary ambitions. After a couple of interviews I was offered a position at Bovey Castle. That was in October 2010 and I still relish the challenge of working here.

What are your top tips for budding chefs?
Just like other chefs, I would say listen carefully and be dedicated. Hard work will get you there eventually.

What are your favourite locally sourced ingredients and why?
It’s got to be the beef and lamb that I get from the moors – right on the doorstep of Bovey Castle. It’s killed to order, hung to order and it tastes absolutely amazing!

Where do you enjoy eating in Devon?
As I haven’t been here that long, I’m still finding my way around the area. As long as they serve freshly cooked and local, I like to give it a go.

Who is your Devon food hero?
Stuart Baker – he does all my lamb and organic veg; his produce never disappoints.