Su Carroll discovers that everything really does stop for tea, as Devon’s consumers opt for something a little bit special in a cuppa… 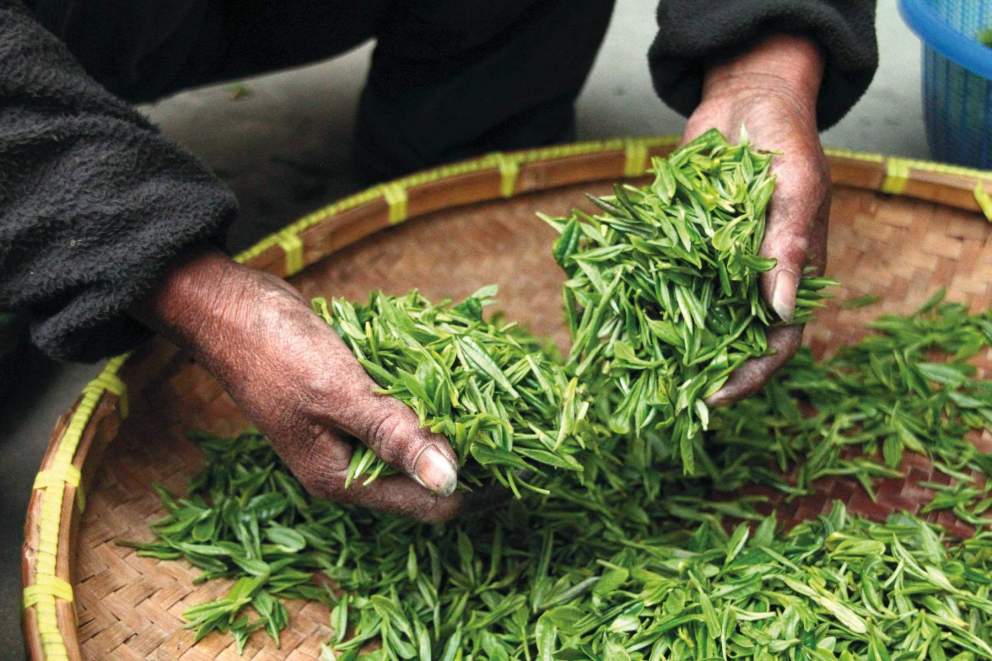 We are definitely a nation of tea drinkers with over 48 million of us having at least one brew every day. With the exception of top tea tipplers Turkey and runners-up Ireland, we drink the most tea per person in the world – 4.28lbs every year. That’s three or four times the amount of tea drunk in countries where it’s actually grown – India and China.

There’s an emerging number of tea companies right on our doorstep in Devon, creating individual blends for a special brew. Cafes, restaurants and hotels are a perfect marketplace for these teas, resulting in a growing number of tea fans buying the products to consume at home.

Plymouth Tea evokes a historical feel. The brand is promoted using a sepia-washed painting of The Mayflower in full sail and each box carries a crest featuring the city’s most famous son, Sir Francis Drake. The company was set up by two friends, Ross Taylor and Tim Cross, in 2012.

Ross says they thought the process of creating a new tea brand would be simple, but it turned out not to be. “We never built it to take over the world, it was always designed to be a small artisan brand people would enjoy. We’ve found that people like the brand and like the taste,” he says.

“It took about two years for the research and development, and to get it to the point from when we said ‘let’s start a company’ to selling our first cuppa. We source our tea mainly from Kenya and India, but it is designed for the soft water down here.

“Tea is suddenly very fashionable with tea clubs everywhere – it’s very chic and cool. It’s not just ladies who lunch though, it’s young professionals and families and it’s really popular with students. The demand is increasing, but this is one business that isn’t really going to change – the British Empire was built on cups of tea. We use it for shock, in times of bereavement or just to cheer ourselves up,” Ross adds.

Marketing expert Helen Lynch, from Tea’s Me in Higher Ashton, started her tea journey blending herbal teas. “I was in a well-known department store in London for a Buy British event and they were serving herbal teas, but they were stirring lots of sugar in them,” she recalls.

“When I came back home to Devon, I made contact with an organic supplier of herbs grown in England. I started blending herbal teas and launched Tea’s Me in 2006. Then people kept asking me if I did proper tea.

“So I decided I would ‘dabble’ on the dark side,” laughs Helen. “I started working with dark tea, having cut my teeth by blending the herbal teas. I always wanted to be organic and I only buy the best quality leaves. The first tea was Propertea – a traditional English breakfast blend — and now the range includes Tranquilitea, Teara – a citrus black tea, and Dartmoor Caravan which has a hint of smokiness.

“I’m launching two new teas this spring: Chai, which is a very traditional Chai with cardamom and Posh Tottea, which is my take on Lady Grey.

“Most people love tea and it’s healthy – if you don’t have milk or sugar, it’s calorie-free.”

Tea has some useful properties. It contains antioxidants, has less caffeine than coffee, and herbal teas are known to aid the digestive system. Research is ongoing into their impact on cancer and heart conditions.

Leane Bramhall, founder of Kineta (derived from the word ‘kinetic’ meaning energy) says more and more people are turning to Matcha because it’s being associated with a healthy, natural energy hit. “It is a caffeinated product; however Matcha tea releases the caffeine slowly into the bloodstream. So, while with coffee you get a high and a low, Matcha can provide a sustained boost.

Kineta uses shade-grown organic Matcha from a family-owned tea farm in Nishio, Japan. Realising the potential of developing the tea for other consumers, Leane worked with Luscombe Drinks to produce a range of bottled drinks in three flavours – Green Apple, Sicilian Lemon and Peruvian Ginger, all blended with organic Matcha, Devon spring water and fruit juices.

At Plymouth Tea, the team is not content with sourcing and selling the tea. It is growing it too – but it’s turning out to be a slow process, according to Ross. “The plants we bought are still in pots after two years, and of the 500 plants we bought only 50 have survived. We keep them in polytunnels and they need a lot of care. We bring them out every day to acclimatise them and then put them back at night.”

Ross adds: “We have a half-acre site on the edge of Dartmoor in Plympton, which is very lush and green. It will take a full seven years before the plants are ready to produce tea and then we will decide whether to blend it or sell it on its own. Eventually, we’d like to be able to open the plantation up to the public. We tell people that when they are buying our tea they are helping to fund the plantation project.” 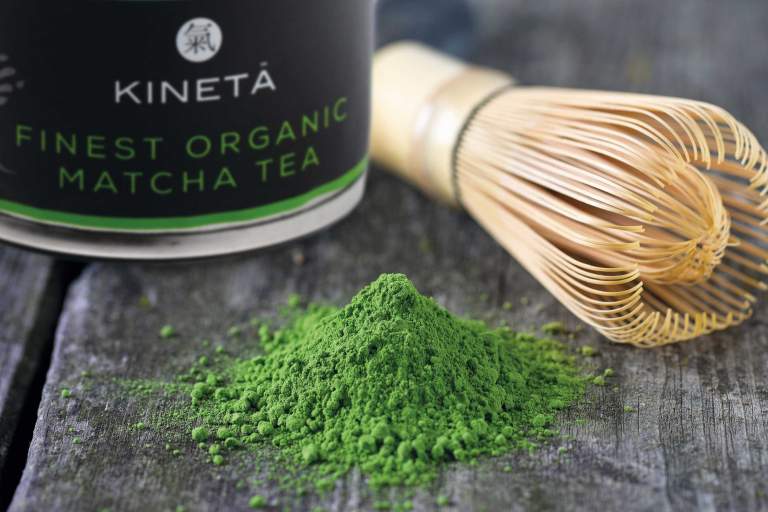 Matcha Green Tea is ceremonial grade and comes from a family-run farm in Japan. It’s organic, with no preservatives or additives. The Cold Brew Matcha Drinks come in three flavours – Green Apple, Sicilian Lemon and Peruvian Ginger, all with Matcha green tea and Devon spring water. They are less than 99 calories, fat-free, and suitable for vegans. The range is also free from any artificial colours, preservatives or additives.

Leane’s favourite tea? “Matcha. I consume it daily without fail and have it in the morning with my porridge.” 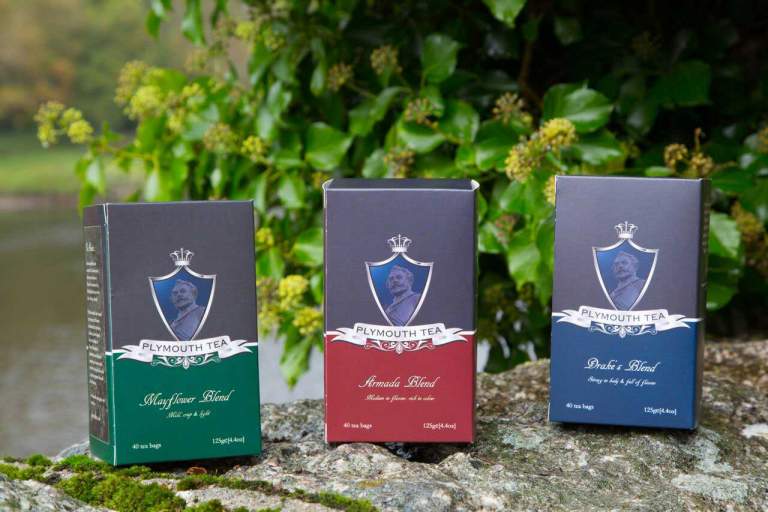 Set up by Helen Lynch, initially selling herbal blends, the range has been extended to include a collection of organic dark teas. She supplies wholesalers and also takes online orders from customers. Helen’s cheekily titled range (that includes Smartea and Flirtea) comes in foil bags with colourful branding. Helen also works with tea rooms and restaurants to produce “own label” teas to their blend specification.

Helen’s favourite tea? “I love Teaheehee, which has hibiscus and is packed with antioxidants. It’s a beautiful red colour and is something completely different. It’s a bit ‘Marmite’ – people either love it or hate it. I drink one cup of tea in the morning and one in the afternoon. The rest of the day, it’s herbal infusions in a half-pint mug.”

Launched in 2015 in Axminster, the company has created a range of bespoke blends which contain only high-grade tea sourced from estates monitored by the Ethical Tea Partnership to protect the workers and their environment. The range includes a Classic Breakfast tea, Earl Grey and Delightful Afternoon – all in pretty packaging.

The tea is blended and packed in the UK into individually-wrapped “stitched“ teabags, which don’t contain glue or staples.