Dairy on your Doorstep

A sense of nostalgia and a passion to protect the planet drives Devon consumers to find alternatives to supermarket milk, discovers Su Carroll 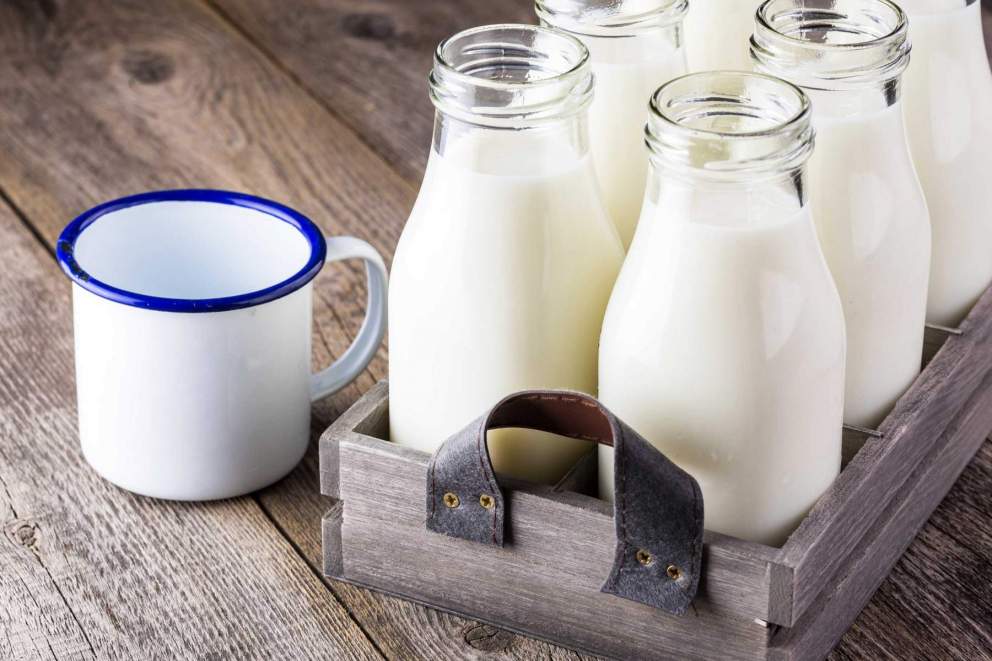 I’m old enough to remember the hum of an electric milk float and the gentle chink of a crate of bottles as milk arrived on the doorstep before dawn, come rain or shine. It was there for your morning tea, cereal or porridge and, if supplies were running low, a note left out at night would ensure more milk was delivered the next morning.

Old yoghurt pots would be upturned to keep the birds from pecking through the foil top. Some people left little bottle carriers on their doorstep, with a dial indicating how many bottles were required. In the 1970s, almost 99% of milk was delivered in glass bottles directly to our homes. Today, according to trade body Dairy UK, doorstep deliveries only account for 3% of all sales.

Grabbing a big plastic bottle of the white stuff from a supermarket shelf just doesn’t have the same nostalgic appeal and Devon’s dairy farmers are pushing back with innovative alternatives to get the milk from the cow to the consumer. In some areas, doorstep deliveries are making a comeback. In others, there are opportunities to go green by using recycled containers to collect milk and there are even milk vending machines.

Dairy farming is the single largest agricultural sector in this country. It’s worth around £8.8 billion to the economy. Annual milk production tops 14 billion litres and consumption is on the rise.

“We started to notice a real increase in doorstep deliveries from January 2017,” says Lisa Bruckner of Dartmouth Dairy. Her father William Bruckner established the business in the 1980s, and it’s still in the family and busier than ever.

“We’ve always sold milk in glass bottles and it’s increasing in popularity as people are keen to reduce their plastic consumption. Doorstep deliveries are on the up in places like Salcombe, Malborough, Buckfastleigh and Kingsbridge. We also deliver wholesale to North Devon six days a week and Weymouth three days a week.”

It’s not just milk that keeps the business afloat. “We have 3,000 different products available for the doorstep,” says Lisa. “Cheese is a huge area and also yoghurts, which are all sourced locally.”

Clinton Dairy in East Devon has come up with a great way of reducing food miles and waste with the installation of an organic milk vending machine at the Otterton Mill visitor centre, just over a mile away.

The dairy’s own Otter Farm grazes its herd of cows on grass in the fields along the River Otter which runs past the historic Mill near East Budleigh. Most of the milk from the farm is processed 50 miles away in Bridgwater but the milk for the vending machine is pasteurised on the farm.

“We wanted to give local people the opportunity to buy fresh, organic milk produced only hours earlier by cows grazing on their doorstep,” says Barney Tremaine, Farms Manager of Clinton Devon Farms Partnership, which owns the farm.

“By cutting out the middle man and reducing food miles, the milk will be as environmentally friendly as it gets and it helps raise the profile of organic farming, which prioritises animal welfare.”

The refrigerated vending machine holds 100 litres of whole milk and customers can purchase a reusable, recyclable glass bottle or bring their own containers, helping fight the war against single-use plastic.

And the good news continues. By upholding a zero-waste policy, any leftover milk is fed back to the calves.

Powderham Farm Shop, near Kenton, also has a milk refill station which is supplied by Dartmouth Dairy. Customers can either bring their own refillable bottles or purchase a 1l glass bottle to fill up with fresh, semi-skimmed milk for 75p per litre.

Farmer Andrew Poole in Lapford used to run a commercial herd supplying supermarkets, but he has gone back to basics at Kelland Dairy. Here he can respond to consumer demand by running a refill service to homes within a ten-mile radius of the farm. “Things have come full circle really,” he says. “Some of our older customers can remember milk coming round on a horse and cart. The doorstep concept is convenient for people. We have been supplying whole milk – which is the most nutritious – but we’ve really been listening to customers. So now, we’re going to introduce skimmed milk and other dairy products like cream, butter and yoghurt.”

Find out if a milkman will deliver to you by visiting findmeamilkman.net run by Dairy UK.

Some Devon dairies deliver to nearby homes. Dartmouth Dairy delivers across most of South Devon (except Paignton and Torquay) – supplying milk, juice and yoghurt in glass jars.

How Now Dairy has a small herd of organic pedigree Ayrshires that are pasture-fed. There are three delivery rounds (charmingly named Buttercup, Petal and Blossom) operating twice a week, Monday to Saturday, in the South Hams including South Brent, Yealmpton, Modbury and Ivybridge.

Farmer Peter Hockridge has a kiosk at his farm in Littleham, North Devon, which dispenses cold milk from a vending machine just 25m from the milking parlour. Buy a reusable glass bottle or use your own containers.

Kelland Dairy has a refill round, selling free-range milk in reusable plastic bottles. It operates four days a week, at locations in villages within a ten-mile radius of the farm in Lapford.

At Taw River Dairy, the pasture-fed Jersey cows are milked once a day after the calves have had their breakfast! The milk is processed on the farm near Okehampton and sold through a number of stockists including The Real Food Store in Exeter, The Burrow Community Shop in Exbourne, Spreyton Village Shop and Lydford Farm Shop.