The Cridford Inn in Trusham has plenty of regulars who keep coming back for great food, drinks and a warm welcome, as Chrissy Harris discovers 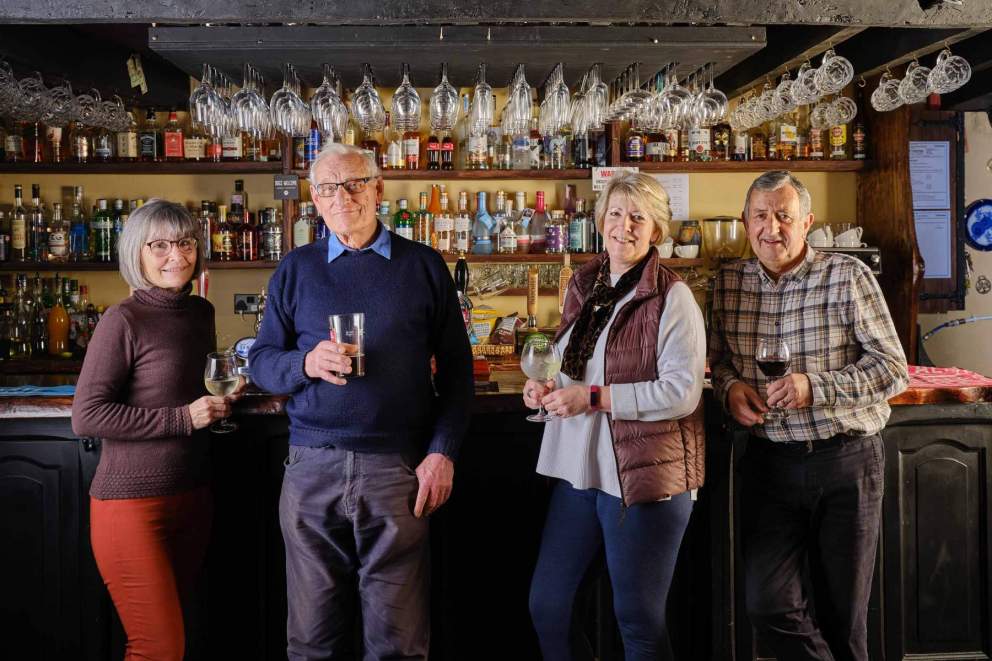 Early lunchtime on a quiet weekday, and the flow of customers is already as steady as the stream flowing outside the Cridford Inn. Some are staying overnight, while others are just popping in to book Sunday lunch, and more guests are arriving by minibus to take over one of the dining rooms.

This historic pub may well be hidden away in the Teign Valley but it’s certainly not undiscovered. John and Caryll Siddorn have been coming here for more than 30 years. And not just because it’s their local. “You always get a cheerful welcome,” says John. “It’s got a really pleasant atmosphere and I think that’s rather more important than anything else. The quality of the food is important, of course, but if it’s not accompanied by a welcoming atmosphere, then it doesn’t work.”

John and Caryll have seen the Cridford change over the three decades or more they’ve been coming to eat and drink here. People have come and gone, the decor has changed, as have the owners. “I have to say this is the best I’ve seen it,” says John, talking about life at the Cridford under the management of Paul and Ness Moir, who arrived here in 2018. “They’ve worked very hard and it’s working.”

John and Caryll like the Cridford’s pub classics menu, including the gluten-free battered Brixham cod and chips. Last time, John tried the vegetarian option and enjoyed it – but not enough to be a convert. “I did give it a go!” says John. “It’s good because they cater for lots of dietary requirements, particularly vegetarians. And it always caters for people with exotic tastes,” he says, talking about the Cridford’s famous Asian-influenced dishes. “But I’m more of a fish and chips man,” he says. “Also, one of the nice things about the Cridford Inn is that it functions well as a bar. You can quite happily go there for a drink and see people you know.” A great local is a rare thing indeed these days. “I’m not tempted to go further afield,” says John. “I’ve never been disappointed there.”

Ali and Mike Chadwick moved to Trusham in 2014 – and headed straight for the pub. They knew it would be the best place to meet new people and help them settle into village life. The plan certainly worked. Today, the couple regularly pop in to the Cridford Inn to meet friends for drinks and meals, in a place that is very much at the heart of their community. “The pub is the hub, as they say,” says Ali. “We wanted to move to a village with a pub because we were new to the area and knew it would be the best way of getting to know people.”

Ali and Mike have also seen the Cridford change over the years under different ownerships but agree that it has gone from strength to strength, helping to provide a focal point for villagers. The Cridford was recently relisted as an Asset of Community Value, thanks to nominations from residents. It acts as the first stage in identifying and nominating buildings that help to further the social wellbeing or social interests of the local community.

But as well as keeping the locals happy, Ali says the Cridford is helping to bring visitors into Trusham. “Trusham is a tiny community, absolutely minute,” says Ali, explaining that the village doesn’t have a shop, school or bus service. “What’s really great is that the pub brings people in from outside the village. The fact that the food and hospitality are so good means that people travel to Trusham to enjoy it. “From my point of view, it’s great because it means that the pub will keep going.”

Ali and Mike both enjoy the Cridford’s Asian-influenced menu and like the fact that there’s a strong emphasis on local produce and local independent suppliers, rather than the big names.

However, it’s mostly the company that keeps them coming back. “I was in there last night with a group of about eight to ten friends,” says Ali. “We were sat for a couple of hours just chatting. Mike meets up with his friends there every Thursday evening, usually before a meal. If I’m meeting up with friends for a walk, we’ll call in for a drink or a meal. It’s great. “They’ve got such a good team in there at the moment – they seem to have hit exactly the right note.”