Grow your own Beer

Beer Sommelier Ben Richards has discovered that it’s possible to grow and brew your own beer from a small patch of land, writes Jennie Cooper 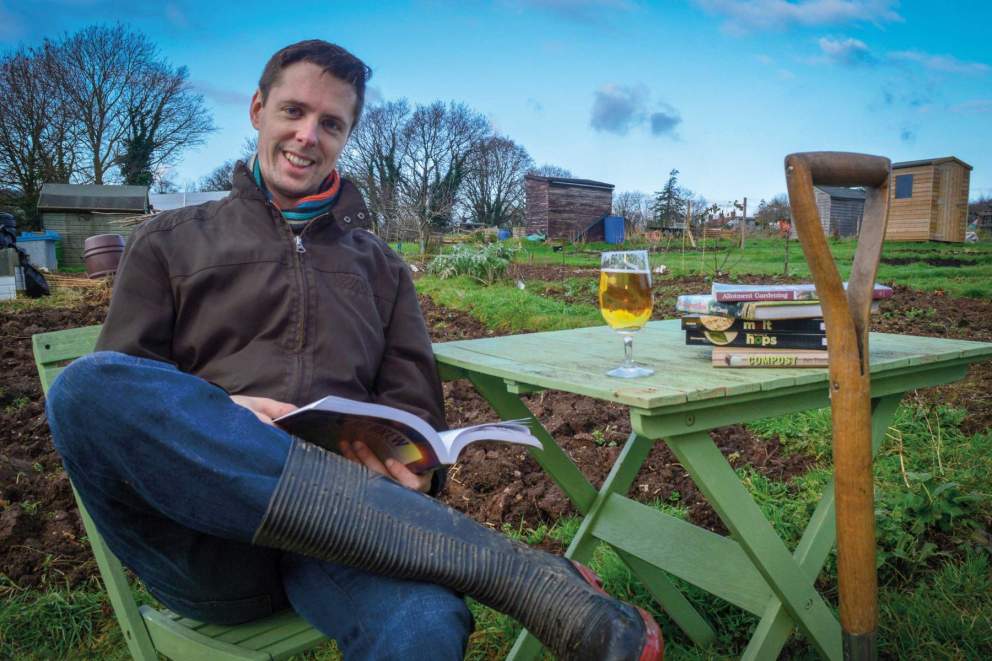 In early 2017, Ben Richards, an accredited Beer Sommelier, decided to try brewing beer from his small allotment in Colyton.

He cleared his patch to grow organic barley and four varieties of hops, and, with the help of researchers at the University of Exeter, find and isolate a yeast culture for brewing. Ben was met with problems such as storms, pests, livestock, an unusually hot spring and a (predictably) wet summer. “Some of these threatened the chances of producing any beer come the end of the project,” he says.

It took 11 months of digging, growing and harvesting, until last November when Ben finally started the brew, combining the barley, hops, water and yeast. He asked his friend and brewer John Magill from Powderkeg Brewery in Woodbury Salterton to help.

Next came the fermenting, bottling, naming and labelling. “After much procrastination and consideration, I settled on a design and name – I went around and around in circles, trying to come up with the name that best described the ingredients, the project, or the place from which it all came, and that is when it struck me. The place already had a name… the plot is called 10S, and once I realised this there was no way I could call the beer anything else.”

Finally, the taste test! Ben enlisted the help of British Beer Writer of the Year and international beer judge Adrian Tierney-Jones to open the first bottle and critically evaluate it. The result? “The beer is hazy as expected and coloured a deep amber, but instead of the floral, fruity or grassy aromas I was expecting, there were spicy, clove and banana aromas from the yeast. The carbonation was pretty good, while the mouthfeel was full with a really rather nice, dry finish,” explains Ben.

Ben describes his 10S as closer to a German style of wheat beer than a traditional British one, putting this down to the yeasts that came from the plot. “I think the rainwater played its part too, as the flavours flowed together. The very soft nature of the water provided a neutral, clear base on which to place the other ingredients, one that didn’t favour hop bitterness or malty tones to come through on top.”

The total amount brewed is 45 bottles. Cheers to Ben’s achievement!