Foodbanks are an invaluable support in times of need, and Su Carroll finds out how to help 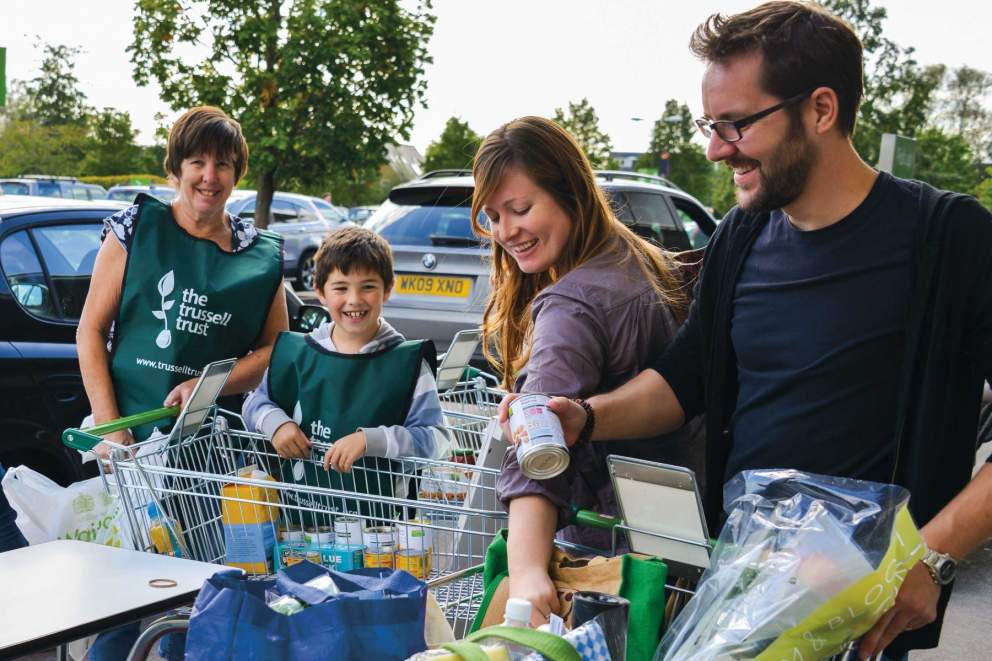 Many Christmas traditions centre on food – the turkey and all the trimmings, the Christmas pudding doused in brandy butter, all those mince pies with cream. Even Boxing Day offers the chance to gobble down turkey and cranberry sandwiches, and bubble and squeak from the leftovers. And when we’re not eating meals, we’re gorging on chocolates, cake, biscuits, nuts and fruit.

For some families, though, Christmas is just another day when they’re struggling to make ends meet and put food on the table.

UK foodbank use continues to rise, according to the latest data from the anti-poverty charity The Trussell Trust. In the year until 31 March 2017, The Trussell Trust’s Foodbank Network provided 1,182,954 three-day emergency food supplies to people in crisis, including 436,000 children. Nearly half of those referrals (43%) were because of benefits delays or changes. In the South West alone there were 103,947 three-day emergency packs, with about a third of them going to children.

Statistics can be overwhelming. But simply put, one in five people in this country is in food poverty. The good news is that four out of five of us are there to help them.

Every day, people are going hungry because they struggle to pay for food. Around a quarter of people on benefits are getting into difficulties because they’ve been sanctioned. Other claimants may have had delays in payment because of a change of circumstances. For some, it might be the sudden impact of redundancy, or struggling to pay an unexpected big bill on a low income.

Help comes in the form of care professionals such as doctors, health visitors, schools and social workers who can issue them with a foodbank voucher, which will provide three days’ worth of nutritionally balanced, non-perishable food per person in the household.

The Trussell Trust charity, which was set up 20 years ago, works with nutritionists to develop a food parcel that contains sufficient nutrition for adults and children, for at least three days of healthy, balanced meals for individuals and families. A typical parcel includes items such as cereal, soup, pasta, rice, beans, tinned meat, veg and fruit as well as tea, coffee and biscuits. All food items, donated by members of the public, are non-perishable, and some foodbanks are also able to offer non-food items such as toiletries and hygiene products. Where they have the right storage facilities, foodbanks will have fresh food.

There are several ways you can help. One is to remember foodbanks in your weekly shop. A friend of mine uses buy-one-get-one-free offers – the buy-one for her, the free-one for the foodbank. Another friend attends regular meetings of a political party and everyone brings something to donate; imagine how much help 30-40 people provide every month. One Devon couple asked their wedding guests to donate food instead of gifts, resulting in a car packed with items to deliver to their local foodbank. You could consider asking for food items in lieu of presents for your birthday, anniversary or Christmas. Or maybe organise a food collection in your office instead of a secret Santa present swap.

It’s helpful to check online with your local foodbank to see what items they need. The Trussell Trust has several foodbanks in Devon – Exeter, Plymouth, Ivybridge, Buckfastleigh and Tavistock. Food poverty is not, of course, just a city problem, and the Northern Devon foodbank has branches in Barnstaple, Bideford, South Molton and Ilfracombe.

Statistics come from The Trussell Trust, which supports 400 UK foodbanks. Visit trusselltrust.org for your nearest foodbank. Many churches and other organisations have similar schemes, search online or ask your local Citizens Advice.

“The longest period where we had nothing to eat was a week and a half. I was giving the kids sugar to keep their stamina up and hydrating them with lots of water. When we went to the foodbank, I burst into tears. They offered us a cup of coffee and a biscuit, and it was divine; I’ll never forget it. I know the assistance, gratitude and love that I experienced from the foodbank really helped.” Alan, father of two, struggling to find work.

“I sat in the car park for about ten minutes getting the courage to go in, but the welcome that I got through the doors was just phenomenal, I felt so at ease. They listened and offered me tea. It was so nice and family-based. I left the foodbank with my bags of food and felt very overwhelmed. I was so glad I had come here.” Diane, mum of three, suffered a drop in income because of serious illness.

“Whether to heat your home or have a warm meal is a tough choice to make. It’s a really hard way to live. You have to go without everyday items like food, hot water, heating, and that’s devastating for most people. It was very humbling and heart-warming to find out that places like the foodbank exist. Using the foodbank was quite upsetting for me because I always thought they were for homeless people on the street. You don’t have to worry where your next meal is going to come from, and that’s a massive weight off your mind.” Peter, an error over sick pay left him without income.