Clare Hunt sniffs out the finest Devon cheese, creates the perfect cheese hamper and discovers where you can buy cheese online 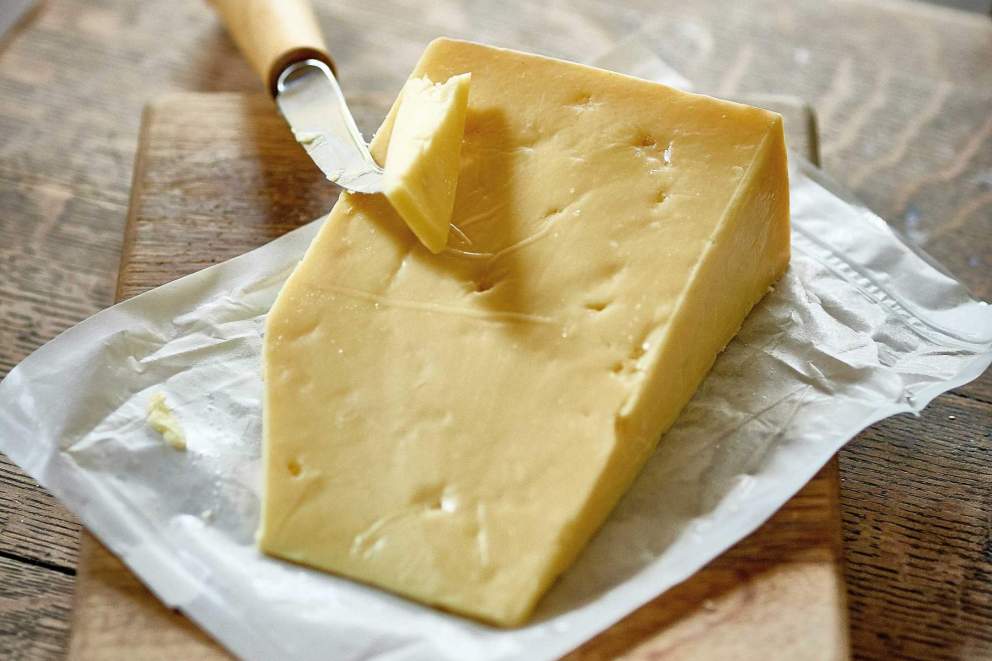 Geography and climate have collided in Devon to bless the county with moist, warm(ish) weather and the richest red soil in which to grow nutritious grass. It’s the quality of Devon’s grass that makes our cheese so fine, and the permanent pasture that swathes so much of the county is richly varied, meaning the cows, sheep and goats that graze it are eating not just one grass monoculture, but numerous herbs and nutritious clovers as well.

The creamy milk produced by free-range herds and flocks is packed with protein, vitamins and minerals and it also has a distinctive flavour – an ideal and enviable raw material from which to make cheese. “Just as wines reflect their ‘terroir’, cheeses reflect the climate, soils and aspect of the place where they’ve been produced,” says Lawrence Wright from Middle Campscott Farm in Ilfracombe, producers of goats’ and ewes’ cheese. “Cheeses, made in small batches with milk from a local flock or herd, have their own subtle and distinctive flavours, and each cheese can have a character of its own.”

Adapting farmhouse cheese production methods perfected through the centuries, many of Devon’s finest artisan cheeses follow age-old recipes and are made using ancient techniques. What’s notable in artisan cheese is the critical importance of the cheesemaker. These aren’t push-button cheeses, these are made by men and women who understand the variables at play – from the mix of clover and herbs eaten by the animals, to the time of year the milk was produced, the weather, temperature, profile of the starter culture and even which cheesemaker is in charge of a batch.

Artisan makers rely on sense, skill and experience – as well as science – to make sure they’re getting the best from their ingredients. The fact that this can lead to slightly different results at different times of the year, and from cheese to cheese, is considered a distinct merit. As Abby Allen from Quicke’s in Newton St Cyres says: “While every Quicke’s cheese is consistent in quality, its individual flavour profile can change from grassy/brothy to caramel/buttery. You never quite know what you’re going to get; it’s that that excites us and curd nerds around the world.”

In a world of food production enslaved by automation, the quality of artisan cheese stands as testament to the dedication of its makers. “The cheese is still entirely handmade today using centuries-old techniques, including hand-cutting in the vat to form the curds, and hand-ladling the curds into the individual cheese moulds,” says Mark Sharman, Managing Director at Sharpham Wine & Cheese near Totnes. “All cheeses are turned by hand every day. This attention to detail and the close contact with the cheese on a daily basis means that quality is maintained to very high standards.”

‘Fresh’ cheeses – those that haven’t been pressed and aged – can have the simplest and least fussy production methods, meaning the consumer gets a product that’s as pure and reflective of the raw milk as possible. Oakdown Farm in the Teign Valley produces its own goats’ cheese, and the simplicity of the process respects the quality of the milk. There are only a few short steps between milking the goats and spooning the finished cheese into wooden boxes, and each of those stages is done by hand.

With just the addition of some salt or herbs, Devon’s best artisan cheeses have something in common: the flavour is all about the milk; the skill is all in the hands of the cheesemaker.

Don’t know where to start? Trust a local expert to put together the best selection of Devon cheeses for you...

The Cheese Shed
Dedicated to spreading the word about West Country cheese, you’ll find all sorts of little-known, small-batch gems – as well as the big names – in The Cheese Shed’s online store. Cheese hampers featuring well-considered combinations of hard, soft and blue cheeses start from £27.99.

Country Cheeses
With branches in Tavistock, Topsham and Totnes, the super-enthusiastic cheese experts at Country Cheeses will recommend which cheeses and how much will make for the perfect cheeseboard.

The Cheese Larder
As well as a counter groaning with more than 100 kinds of cheese – including lots from Devon cheese makers – The Cheese Larder in South Molton also stocks a bewilderment of crackers, chutneys, beers and wines to complement your choice. Hampers can be custom-made upon request.

Sharpham: a Jersey milk soft cheese – the original made by Sharpham Wine & Cheese – is often likened to Brie. Mould-ripened, it’s creamy and rich, best enjoyed (of course) alongside a glass of Sharpham’s own barrel-fermented dry white wine. The light oak and lower acidity of the wine complements the ample flavour of the cheese.

Quicke’s Vintage Clothbound Cheddar: having matured for a whopping 24 months, Quicke’s Cheddar is deeply complex with a robust punch of flavour – ideal to savour with a rich glass of Port. If Calvados is more your thing, turn to Quicke’s Oak Smoked Cheddar, marrying the sharp apple zing of the brandy with the wood-fire flavour of the cheese.

Campscott: an organic ewes’ milk cheese made exclusively from milk produced on the farm near Ilfracombe. Hard-pressed, with a natural rind formed after the cheese is brined in sea salt, Campscott is matured for two to three months to maximise flavour. Pair with a buttery, nutty white Meursault. Or, opt for Campscott Cumin coupled with a hearty red Côtes du Rhône to bring out the cumin’s earthy spice.

Oakdown Farm Goats’ Cheese: this fresh cheese is soft, crumbly and creamy. Its freshness gives it a mild and subtle flavour that’s not overwhelmingly goaty – the perfect introduction to goats’ cheese for those who are unsure. Balance with a crisp, light Provençal rosé to enhance the clean zing of the cheese.

Devon Oke: Okehampton-based Curworthy Cheese follows a unique, Gouda-inspired recipe for the full-fat, hard Devon Oke. Having ripened for six to seven months, the cheese mellows from mild and creamy to nutty and rich. Just the thing to enjoy with a refined Amontillado sherry or even a glass of Champagne.

Devon Blue: make the decision to ditch the Stilton and choose something local from Ticklemore, Devon’s blue-cheese specialists. Made in the South Hams with milk from local Friesian cows, Devon Blue is sweet, crumbly and complex, with delicate blue veining. Ticklemore recommends pairing it with some pickled figs and a hoppy beer such as Crispy Pig from The Hunter’s Brewery in Ipplepen.