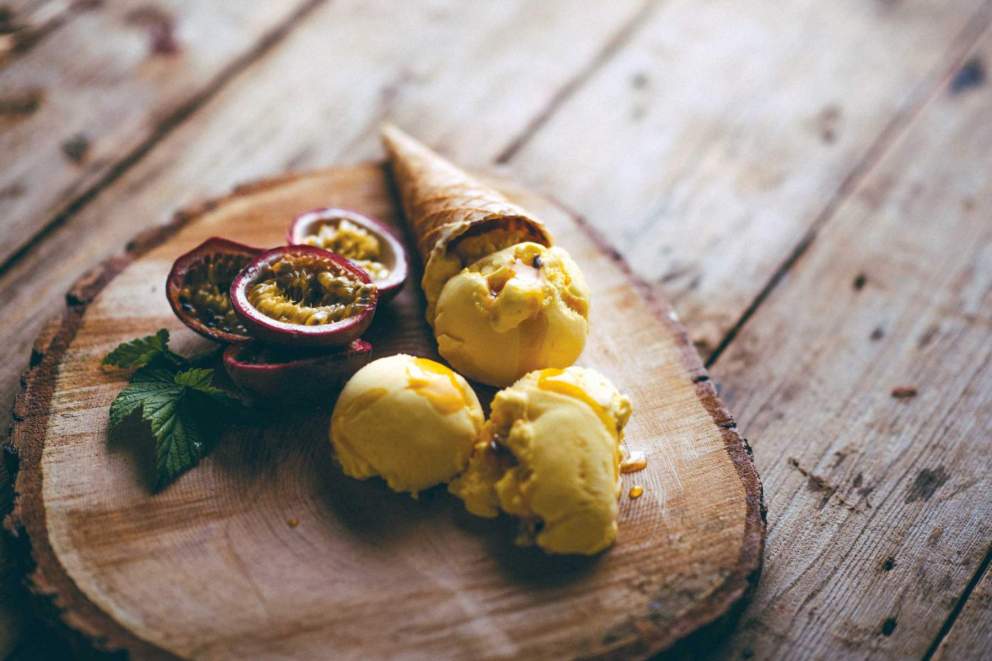 Devon is surely among the contenders for the crown of ‘best-ice-cream-in-the-world’. Where climate and geography collide to produce spectacular beaches together with luscious, verdant pastureland, what else to do but take the county’s abundant supply of rich and creamy milk to make exceptional frozen delights?

Artisan producers are inspired to create top-quality ice creams, sorbets and frozen yoghurts, brimming with imagination, chock-full of local ingredients. Common to the best of these, is a dogged commitment to and pride in the heritage of dairy farming, an uncompromising passion for translating natural ingredients into exceptional finished products, an appetite for experimentation and a keen sense of responsibility for the environment in which they operate.

Artisan ice cream differs from its mega-scale factory cousin in some very notable ways: less air beaten in during manufacture means a smoother, denser product with greater depth; fresh ingredients rather than synthetic additions result in a product that tastes cleanly and honestly of what it’s made from, and small-batch production allows for frequent experimentation with new flavours, reflecting seasonality and fashion.

Whatever your flavour - from vanilla purist to tutti-frutti funster - ice cream is a food overwhelmingly associated with happiness, a simple and satisfying pleasure. Let’s peep into some of the parlours of Devon’s ice cream pioneers, all aiming to put smiles on our faces…

Plymouth-based Langage Farm’s 40 flavours of ice cream, along with sorbets and frozen yoghurts, blend traditional methods with a modern approach for optimum results. General Manager Paul Winterton says: “Understanding the science behind what we do is crucial at all levels as milk can be a very volatile product.” And sustainability is vital to the company too. Langage is carbon neutral, generating its electricity via an on-site anaerobic digester. The signature flavour from the Langage chiller is Thunder & Lightning, inspired by the Devon delicacy of golden syrup and clotted cream in a roll.

In the same family for three generations, Otter Valley Dairy at Aplins Farm in Monkton started selling ice cream as a farm-gate enterprise to maximise value from its pedigree Holstein-Friesian herd. Its small-batch process produces a smooth, deeply flavoured product with very little air to bulk it out. While some of the old favourites – vanilla, honeycomb, toffee fudge – remain enduringly popular, more left-field contenders, such as rice pudding and jam, or strawberry with balsamic vinegar, are gaining favour.

With 48 flavours of ice cream, plus sorbets, frozen yoghurt and diabetic vanilla on offer from Yarde Farm in Plympton, the company’s Helen Cox puts success down to the smooth, creamy texture and intensity of flavour. Tubs are filled by hand and the tight-knit team works hard to offer customers a personal touch. Sales of the currently fashionable Salted Caramel have spiked and the more adventurous flavours, Jaffa Cake and Liquorice Fudge, are also on the up.

At Taverner’s Farm in Lower Brenton near Exeter, the reintroduction of South Devons (nicknamed the ‘Orange Elephant’ on account of their wide faces, big ears and rust-red coats) has been a labour of love and a nod to the farm’s heritage. Celebrating its tenth birthday this year, Orange Elephant remains a family concern, with up to 52 flavours on the go, all hand-blended and made in small batches. Elderflower & Lime and Muddy Green Wellies are still signature flavours after 10 years. Farmer and co-owner Helen Taverner says: “Being a small producer we have complete control over our product, because it’s ours, from cow to cone!”

Celebrating ‘classics made properly’, Rookbeare Farm in Cheriton Fitzpaine produces ice creams and sorbets that taste cleanly of their ingredients, made in small batches, with no additives. In reflection of this, vanilla remains its bestseller. Water from its own spring goes into its sorbets and, as owner Jamie Marsh says, being an artisan producer means: “You can use proper ingredients, like a restaurant rather than a factory.”

The ice cream from Dunstaple Farm near Holsworthy uses high-quality, natural ingredients sourced locally for its Farmer Tom brand. Its traditional production process allows the quality of the ingredients to shine, with Clotted Cream Vanilla standing the test of time. Salted Caramel-mania has been reflected in a recent new popularity for that flavour.

Dunstaple Farm ice cream is also sold by Ruth Gilson from Mabel, her pink vintage ice-cream van which can be seen at events all over Devon. Mabel is all about nostalgia, so traditional flavours such as raspberry ripple and lemon meringue rule. But ingredients are key too. As Ruth says: “You can imagine happy cows make happy ice cream.”

When Louise and Chris Carpenter set about establishing their herd of pedigree Guernseys, making ice cream from the luscious, creamy milk was the logical plan, and Auntie Moo’s Golden Guernsey Ice Cream at Fairfield Farm in Denbury was born. A hands-on family business, Louise makes the ice-cream only 100 yards from the milking parlour. While Auntie Moo’s luxurious Creamy Guernsey is a perennial favourite, Fabulous Ferrero currently tops the popularity stakes.

Traditional methods, service and natural flavours are behind the products from the Dartmouth Ice Cream Company. Innovation comes in the shape of imaginative new flavours, devised for intensity of taste. Their Gin and Cucumber Sorbet contains real gin, with a smidgeon of juniper berry for deep flavour. Manager Alasdair Hooper observes: “With a greater awareness of food, people are now used to unusual creations. This includes ice cream, so it’s becoming a greater challenge to surprise them.”